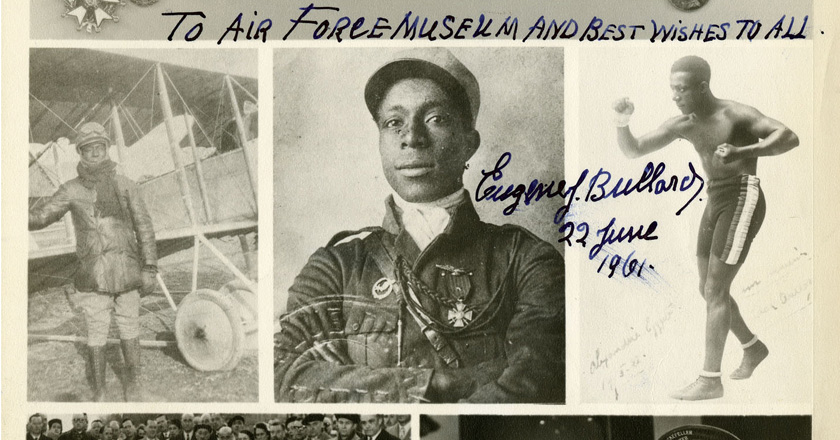 Eugene Bullard lived a fascinating life. Born in Georgia, he determined at the age of 8 that he would leave the South for a place that he would not be treated differently because of the color of his skin. For him, that place was France. By the time he was 15 he was making a name for himself as a boxer in England and France. At age 19 he enlisted in the French Foreign Legion to fight for his adopted country. Bullard served as a machine gunner in his infantry regiment until he was injured at Verdun in 1916. The doctors thought he would never walk again. They were wrong.

In 1917 there were several black air gunners in France’s “Army of the Air” (Armée l’Air, it became a separate air force in 1933). One of Bullard’s friends told him that since he could no longer serve with the infantry, he should try to become a gunner. Bullard talked to the commanders and they transferred him to pilot training. He earned his wings in the summer of 1917, and during the fall was assigned to the famous Lafayette Escadrille, a squadron composed of American volunteers and French military aviators.

Bullard flew around 20 missions in the approximately 90 days he was an active pilot, and got two unconfirmed kills. Accompanying him on every combat flight was a lucky charm tucked inside his coat—his pet Capuchin monkey named Jimmy. Bullard flew a SPAD VII that was decorated on the fuselage with a bleeding heart stabbed with a knife and the words “All Blood that Flows is Red” in French. Later, his unpublished autobiography would be titled “All Blood Runs Red.”

America declared war in the spring of 1917. With no formal standing army, it took a long time for American troops to be sufficiently trained serve at the front. The eyes of command turned towards the Lafayette Escadrille, and around the time that Bullard entered the unit in the fall of 1917 they were figuring out the process to bring the men from the French Foreign Legion into the American military.

Dr. Edmund Gros is remembered as a major advocate for the American airmen of the Escadrille, facilitating the creation of the unit and their later transfer to American command. What is less well remembered is that he was a devout racist. After finding no reason to fail Bullard on his physical, Gros used the excuse of Bullard’s lower rank to refuse his entry into the American Army Air Service. He would continue to frustrate recognition for Bullard until he died in the 1940s.

The Escadrille would not fully transfer to American command until spring of 1918; by that time, Bullard was back with his infantry unit. The sort of man to never turn down an opportunity to punch a racist, Bullard was drummed out of the French air force for fighting with a superior officer, and then transferred back to his old infantry regiment in the winter of 1917. He served the rest of his war in a support role because of his injuries.

For his service in WWI, he earned a total of 14 medals. He lived the rest of his life virtually unknown in his native land, but a celebrated hero in his adopted country of France.

In the interwar years he became a big name in the Parisian nightclub scene. He managed several popular clubs and eventually opened his own, L’Escadrille, which had a boxing gym attached that he operated during the day. During his life there in the ‘20s and ‘30s he crossed paths with dozens of renowned figures including Josephine Baker, Ernest Hemmingway, Pablo Picasso and Langston Hughes.

In 1937, he went back to war. He joined the French Underground, and kept the liquor flowing and his ears open. He spoke fluent German (in addition to French and English) which the Nazis he was spying on never expected. In 1940, the Germans invaded, the nightlife died down and Bullard had to close his club and stop sleuthing—he was too distinctive on the street. He left a shattered Paris and walked the 75 miles of war-torn countryside to Orleans. There he joined the infantry as a machine gunner under the command of one of his old friends from WWI. In the last formal battle to defend France, he was the only survivor from his unit and he was seriously injured. He walked another approximately 300 miles to Spain despite his battle-shattered vertebra, acquired a passport, and left for America. He left behind a newly divided France, his property in Paris, and, most importantly, his two daughters.

When Bullard arrived in the United States, Pearl Harbor had not yet happened. With the help of his old Resistance contacts his two daughters were able to leave France and find passage to America and join him. Too old to enlist, he spent the war years tirelessly advocating for Charles de Gaulle and the Free French in New York City. Life was not glorious for the war hero. He picked up a series of odd jobs in New York City until he finally settled as an elevator operator at Rockefeller Center.

During the post-war years Bullard participated in the fight for Civil Rights. He was beaten by cops after spitting back at a White man at the Peekskill Riots in 1949. He was also beaten for refusing to move to the back of a bus in upstate New York. The incident permanently damaged one of his eyes.

Forever a hero in France, he briefly returned to Paris in 1954 after being asked to be one of four men to participate in relighting the flame at the Memorial for the Unknown Soldier at the Arc de Triomphe. In 1959 he was made a Knight of the Legion of Honor of France, his fifteenth service medal. This distinctive medal led to a live interview on TV’s popular Today Show with Dave Garroway. After 40 years a stranger in his own country, he was finally given the recognition his deserved.

Eugene Bullard died of stomach cancer in 1961. He was buried in New York wearing his French Foreign Legion uniform, with the French tricolor draped over his coffin. In 1994, the US military made amends for its harm against Bullard, and he was posthumously granted a commission in the United States Air Force as a 2nd Lieutenant.

--Brenda has a master's in Museum Studies and is a strong advocate for diversity and inclusion in the museum community.

To learn more about Eugene Bullard, you can read the detailed biography: All Blood Runs Red: The Legendary Life of Eugene Bullard-Boxer, Pilot, Soldier, Spy by Philip A. Keith and Tom Clavin, available in the Museum Store.

Please see the photo gallery below. 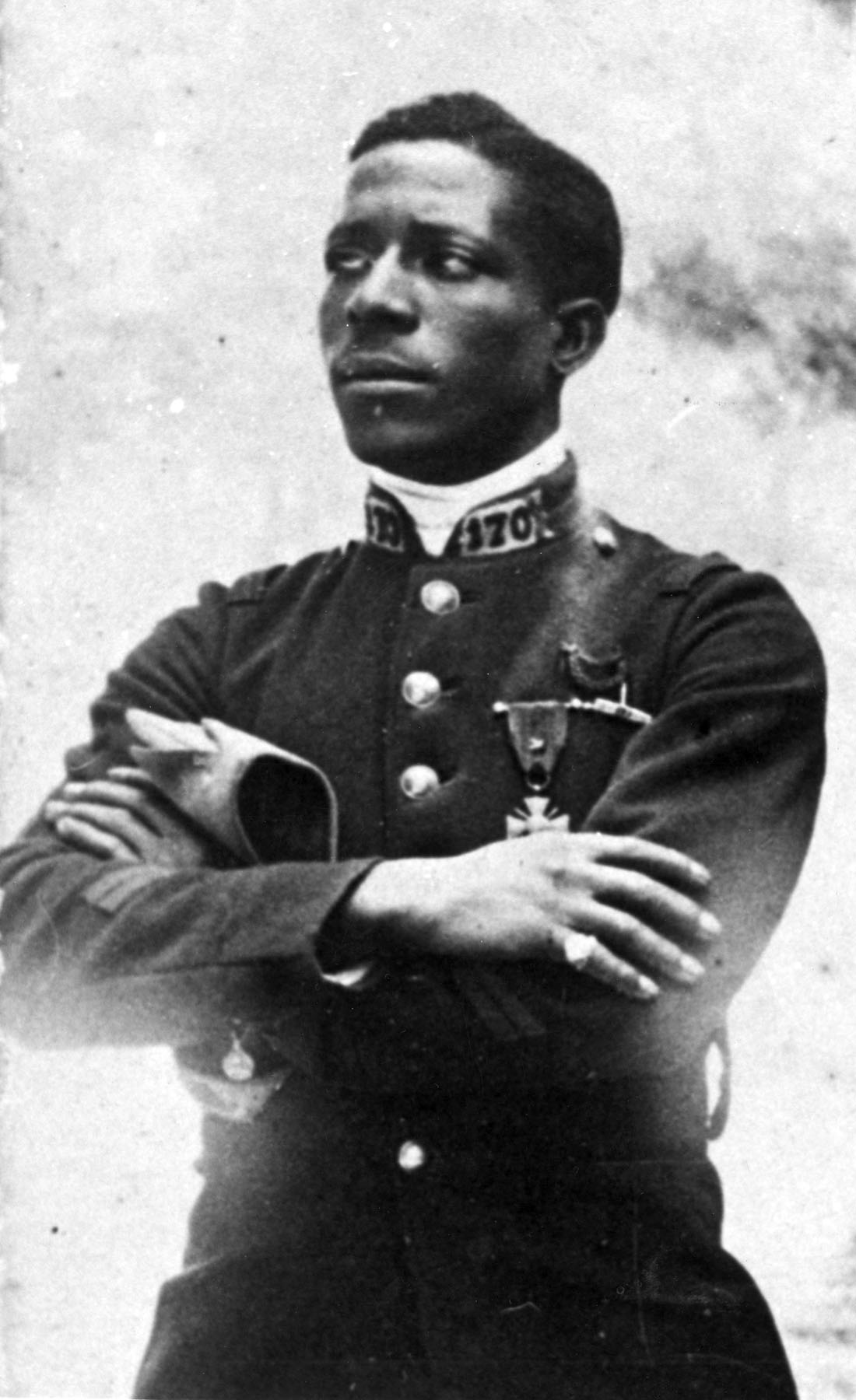 Eugene Bullard during his flight training. The insignia on his right chest is his student pilot insignia, and the Croix de Guerre with Star he received for valor during the Battle of Verdun on his left. Just visible over the Croix de Guerre on the left are unofficial wings worn by many French pilots. (U.S. Air Force photo) 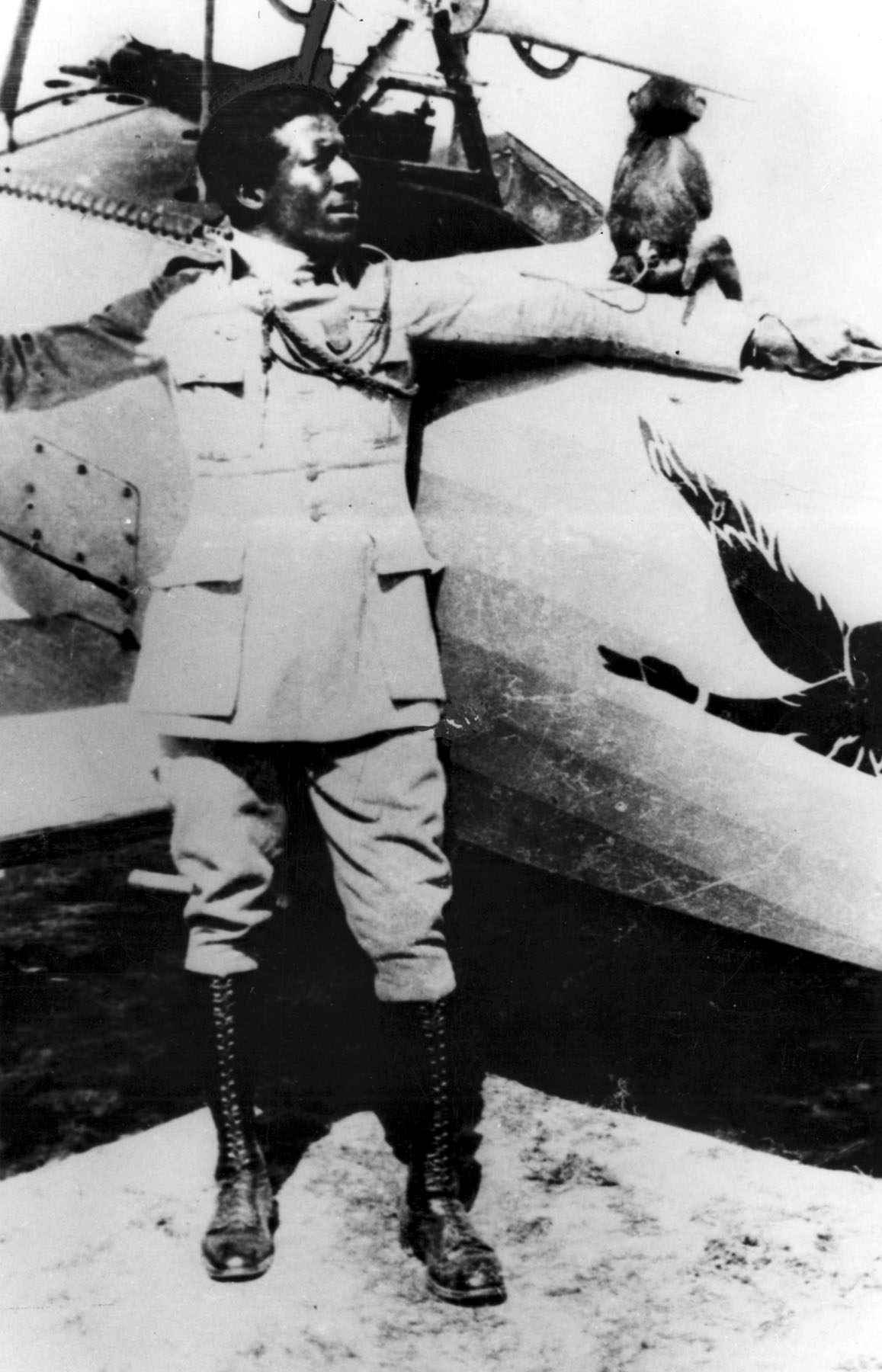 Eugene Bullard with his pet monkey “Jimmy” beside a Nieuport 24 fighter of the 93rd Squadron (Escadrille) in August or September 1917. He flew with Jimmy tucked inside his coat on every combat mission. (U.S. Air Force photo) 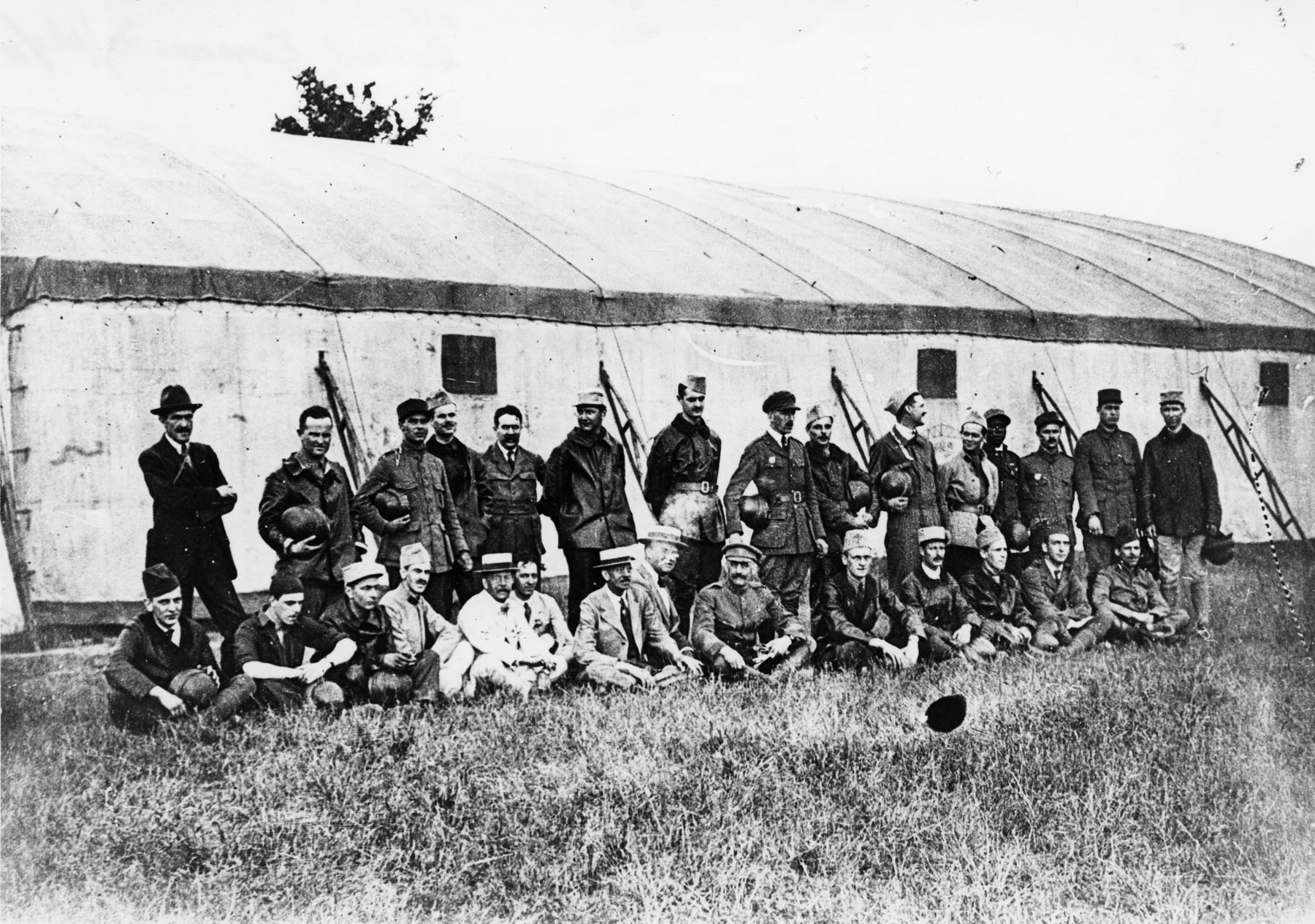 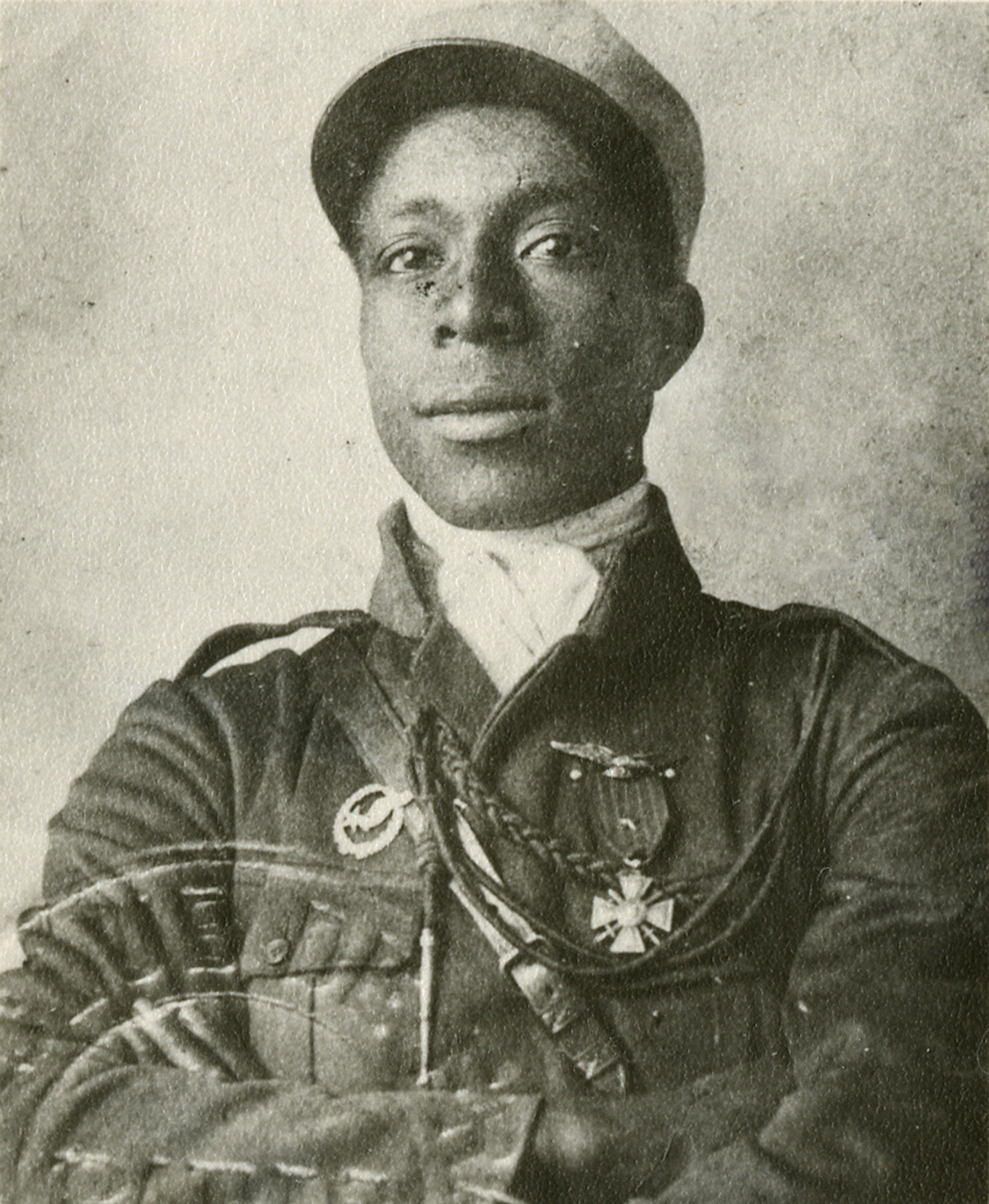 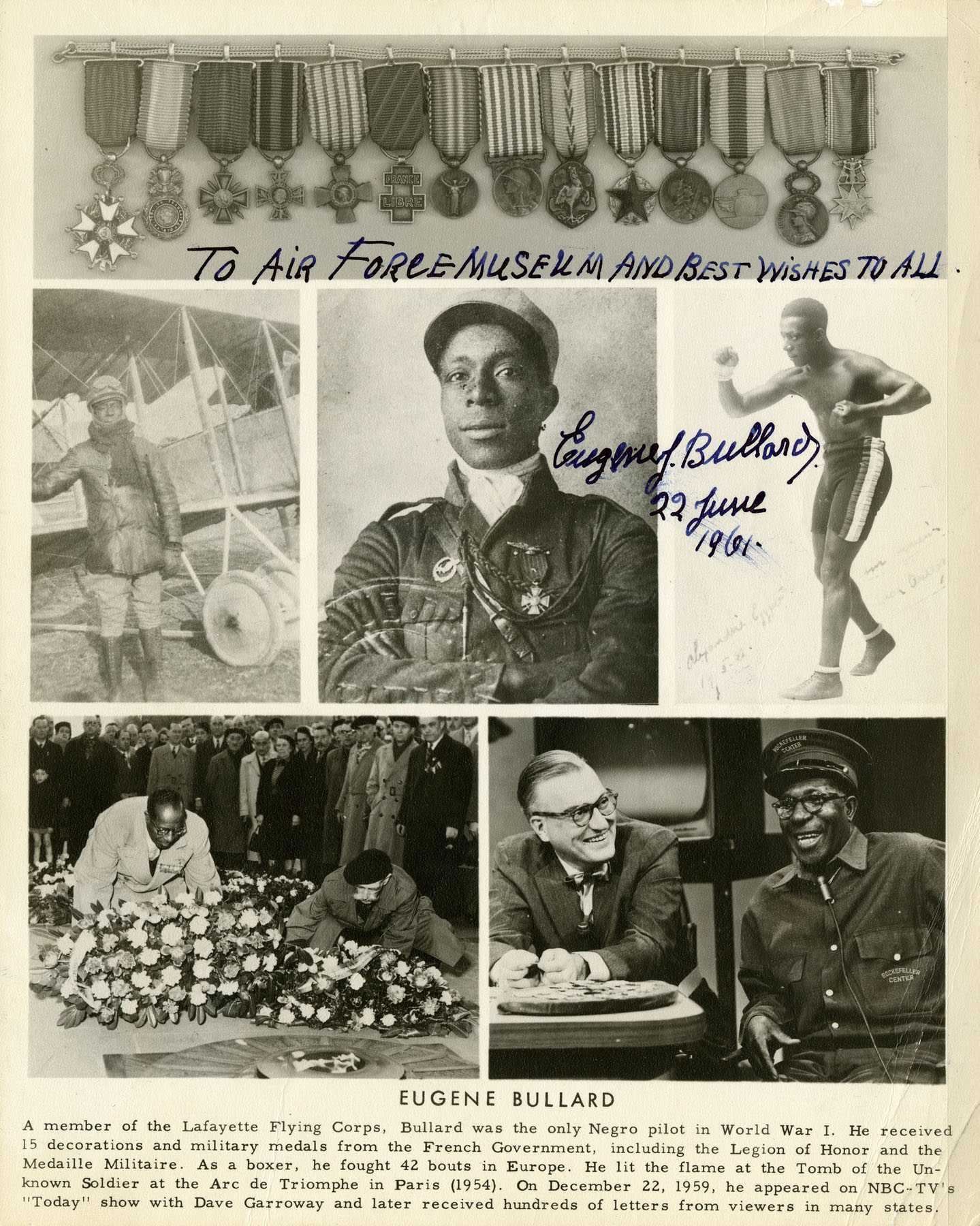