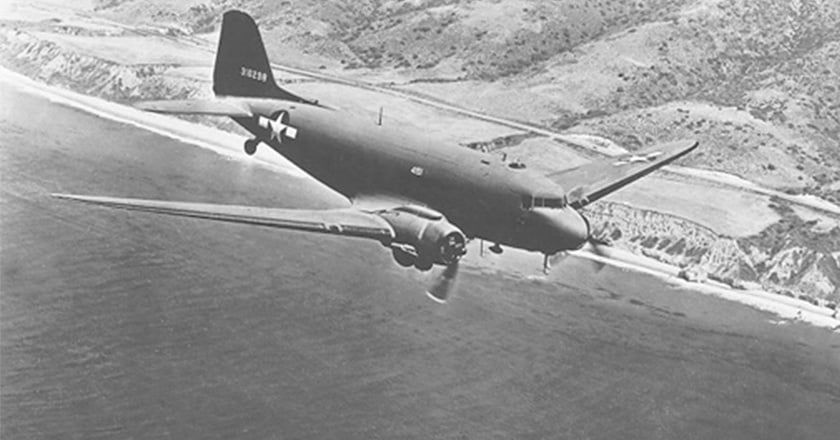 
It’s said that when General Dwight D. Eisenhower was asked to name the weapons that led to the Allied victory in WWII, he didn’t mention bombers or fighter planes—he named the C-47 Skytrain, due in part to its ability to carry safely large loads of everything from soldiers and jeeps to ammunition and food.

As an aircraft that enabled complex wartime logistical operations, the C-47 isn’t the most glamorous or idolized aircraft of WWII. It earned the nickname “Gooney Bird” because its large, lumbering image mirrored that of the giant albatross birds found on Midway Island in the Pacific. Despite the goofy name, the Gooney Bird was critical to executing support operations that helped win the war. What made it such an indispensable logistics machine, and how did it come to be? It’s time to salute this unsung hero of WWII aircraft.

The C-47’s roots can be traced all the way back to 1931, when a wooden TWA airplane carrying Notre Dame’s beloved football coach, Knute Rockne, crashed due to a wing failure. The incident compelled the Bureau of Air Commerce to decree that planes with wooden wing spars must undergo more-frequent inspections in order to transport passengers. This announcement pushed aircraft manufacturers to begin developing all-metal passenger planes. At this time, Boeing was already a step ahead, working on the Model 247. Boeing also happened to be part of the same corporation that owned United Air Lines, so United received the first forty 247s that were produced. But American Airlines wanted in on this metal-aircraft design as well and approached Douglas Aircraft to build a comparable aircraft: the Douglas DC-1, a roomy, twin-engined airliner that could carry up to 14 people.

Douglas made over 800 DC-1s, DC-2s, and DC-3s, and it developed a military transport that was based on the DC-3. The most numerous variant of the military transport was the C-47 Skytrain, which had a reinforced floor to accommodate heavy cargo, a large door on the left side of the fuselage for letting cargo in and paratroopers out, and, sometimes, an astrodome—a bump on the top for celestial navigation.

Big Day for the Gooney Bird

Although the C-47 served dutifully during the entire Second World War, its proudest moment just might be the D-Day invasion, also known as Operation Neptune, when scores of C-47s carried about 13,000 paratroopers and towed some 4,000 glider-borne troops to the Normandy beaches on June 6, 1944. There were approximately 900 C-47s stationed in Great Britain at the time, and a portion of those were flown in organized waves towards France, meeting up at certain check points over the English Channel to coordinate the invasion.

The operation did not go entirely as planned. With poor weather to contend with, gliders were floating down in near-darkness and the undertrained pilots—with no fighters to escort them—were easily spooked by antiaircraft fire. More information about the numerous ways in which the operation went awry were detailed in a declassified report released in 1978.

But, as it often happens in war, success is based upon the poor decisions of one’s opponent. The Germans were not prepared for such an assault because it defied common military reasoning. The Germans anticipated poor weather in the area and expected an Allied attack on Berlin, not a beach in the northwest of France. Hitler, who typically went to bed at 3:00 a.m. or later, had standing orders that he not be bothered under any circumstances while he was asleep, and General Erwin Rommel was in Germany for his wife’s birthday. In short, the Germans’ mistake of failing to prepare outweighed the difficulties the Allies’ forces faced that day.

No Rest for the Gooney Bird

The C-47 was not just an MVP aircraft for the Americans. It was also delivered to wartime allies like Great Britain, Australia, Canada and New Zealand, as well as China, France and Brazil. It actually flew on both sides during the war, being built under license in the Soviet Union (as the Lisunov Li-2) and in Japan (as the Showa- and Nakajima L2D).

The reliable and durable C-47 still got plenty of work after WWII because it was easily reconfigured back into the DC-3 airliner. Airlines could buy C-47s for around $50,000 right after the war, and then had only to install seats, a lavatory, and insulation to carry travelers during the postwar years.

But the C-47 still had a military career ahead of it. The C-47 became the AC-47 gunship during the Vietnam War and was nicknamed “Puff the Magic Dragon.”

The C-47’s resilience and durability are difficult to match. No C-47 or DC-3 has ever crashed due to structural reasons, and the last American military C-47 was not retired until 2012.

Check out the fighters and bombers in our Personal Courage Wing!