The Life and Death of Stars: An Interview 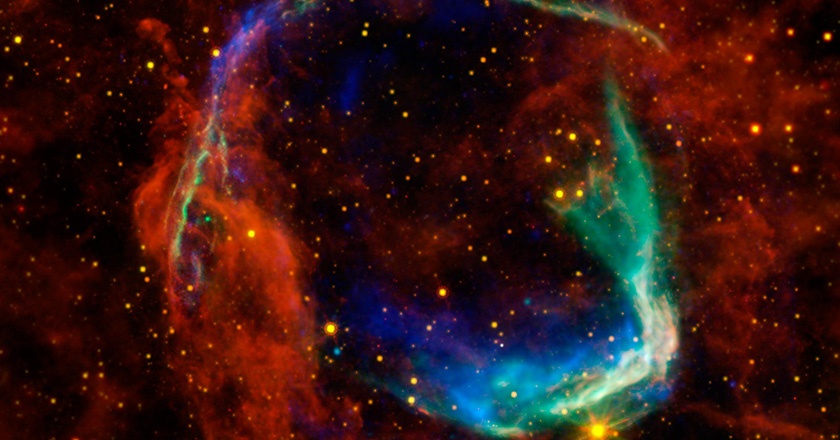 
The Hubble telescope—an optical telescope released into space in 1990—has been taking photos of stars in deep space and has changed our understandings of the universe. But what do we know about the lives, and deaths, of the millions of stars that Hubble observes?

I talked to Samantha Geltz, a digital programs instructor here at the Museum, about a very specific astronomical topic: the death of stars. Geltz conducted research on solar variability and black holes, and was patient enough to answer a few questions about the life and death of stars.

How do we know what we know about stars?

Through a lot of observation. During ancient times, there were dedicated members of societies who would track the sun (staring at it, which wasn’t safe) but that’s how early people learned about eclipses, sun cycles, and supernovae. There’s actually ancient rock art at Chaco Canyon National Monument in New Mexico that depicts the crab nebula, which was observed for two years with the naked eye. And with ancient texts and records, we know that those drawings were created in the year 1054. The crab nebula can also be seen in Arab, Chinese, and Japanese rock art.

Now, there’s giant telescopes that observe stars from Earth and some that take photos from space, like Hubble, which we have a replica of in our Space Gallery. Using these instruments, we can track the properties of stars of various categories over time. Spectrometers, for example, allow us to see beyond our visual spectrum to observe the gamma rays, infrared, and microwaves that create a fuller picture of what stars look and act like.

Using these tools and years of observation, we know that our sun is about 4.6 billion years old. A star the size of our sun has an approximate lifespan of about 10 billion years. This means that it still has about 5 billion more years left in its life before it expands to devour Mercury, Venus and potentially our very own Earth. As the sun expands, it loses it gravitational pull on Earth which allows Earth to move away from the expanding sun. Scientists are still debating if the sun will fully swallow the Earth or just reach where Earth used to be.

We probably won’t be around for it. It’s the natural course of what happens to stars the size and composition of our sun.

Our sun is at the peak of its life. But as it burns out, it will create a lot of heat and pressure which then pushes the outer layers of the sun outward to the point that it will lose its gravitational hold and will expand. That’s why it could eventually eat us. Then it will get to a stable form as a red giant where is could burn for another few thousand to a billion years and then fizzle out to a white dwarf. But there’s not any fusion happening at that point—there’s not enough material or energy, so it will stay stagnant at that level for billions of years until it cools enough to become a theoretical black dwarf. No black dwarfs have been observed because the time it takes to create one is older than our universe.

But it’s the bigger stars that have the more extraordinary deaths. There are 2 types of supernovas. Type I happens in a binary star system where one of the stars is a white dwarf. The white dwarf will pull material from the other star until it has collected too much material for its core to support so it explodes.

Type II takes a star that is approximately 8 to 25 times the size of our sun. As it burns though all its materials and the fusion processes reaches the iron element, matter falls back onto the core of the star. The core becomes too heavy to support its own gravity forcing its core to collapse and then explode.

So, are black holes the opposite of supernovas?

In a way. Black holes are created from a gravitational collapse, meaning that some black holes are born during supernovae while others, whose stars are big enough, can collapse into a black hole without the need for a supernova. Supernovas blow all their material outwards; black holes suck in all the material around them.

But there are misconceptions about this. Tons of material is swirling around a black hole and being pulled inwards due to the gravitational pull of the center of the black hole. This disk of material is called the accretion disk. This creates fast winds that can then push materials back out into the universe. We can tell how and when this happens by using spectrometers, which help us observe wavelengths beyond our visual spectrum. Everything around us has a specific wavelength that it emits—we know what hydrogen, helium, nickel, iron, etc. look like. When we look at these phenomena through a spectrum we can see that a black hole is spewing these things back into the universe. Now if things get past the event horizon of the black hole, then they will get sucked into it with no way of escaping.

How do you know all of this, and what else don’t we know about the life and death of stars?

I spent two years doing research at the College of Charleston, and one of my projects was coding through data gathered by the Kepler telescope, whose objective was finding habitable Earth-like planets. During its mission, Kepler took a lot of photos of space, including photos of stars, which it didn’t need. So, I was assigned to examine some of these photos. The stars I looked at were all found in a 4 arc second window of space (about 400 feet of sky) that contained one million stars, 180,000 of which weren’t flickering. I wanted to see whether we could truly label these stars as constant, or if they’re just showing high levels of activity but low levels of variability.

I also studied the Broad Absorption Line quasar (PG 111-080), a black hole whose x-rays and ultra violet waves have been recorded by the Swift and Chandra satellites. I looked at charts and models that indicated its winds were blowing material out into the universe, and by observing this we can learn more about how black holes interact with the galaxy.

But there’s a lot more we don’t yet know about stars. Black holes are still mysterious. We haven’t seen what happens when something goes through the whole cycle of interacting with a black hole, but we have theories on it. Stephen Hawking believed that material going through a black hole would be simultaneously stretched and compressed. We theorize based on laws of physics and how things work on our planet, but do they work everywhere?

Want to discover some answers about space for yourself?

Check out our Space Gallery!

Caption:  This image combines data from four different space telescopes to create a multi-wavelength view of all that remains of the oldest documented example of a supernova, called RCW 86. The Chinese witnessed the event in 185 A.D., documenting a mysterious "guest star" that remained in the sky for eight months.