The Life of Eugene Bullard 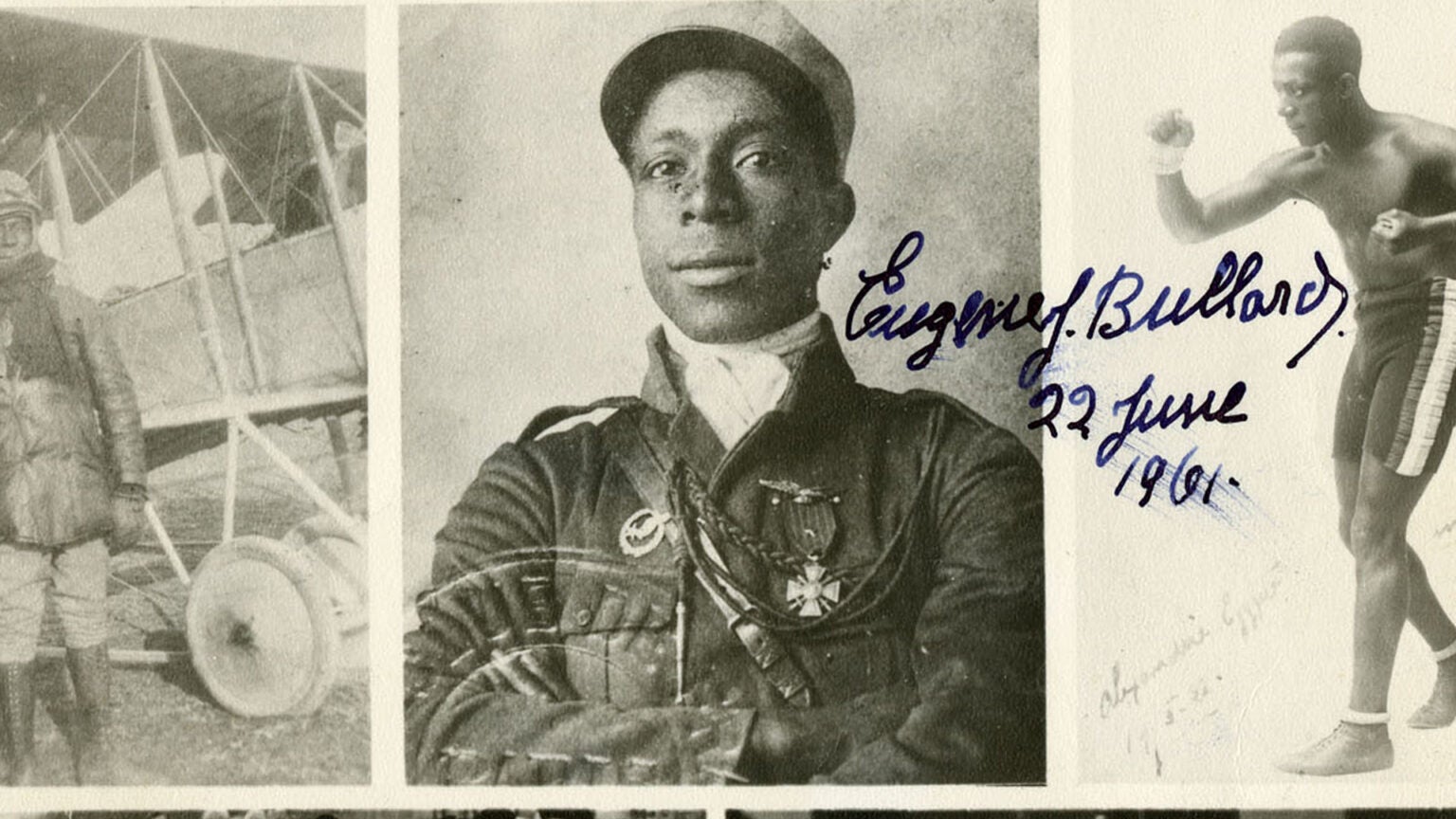 A portrait of Eugene Bullard.


If Hollywood is searching for the subject of the next hit miniseries, the first black American fighter pilot Eugene Bullard should definitely make the shortlist. Eugene "Gene" Bullard was born in Georgia, the seventh of ten children. His father William Octave Bullard was a formerly enslaved person, and his mother Josephine Yokalee Bullard was a Native American of the Creek Tribe. The defining moment of Gene’s life occurred when he was around eight or nine and witnessed his father almost get lynched by a mob after hitting a white man in self-defense.

Wanting a life away from the racism of the American South, and inspired by stories told to him by his father, Gene decided to escape to France when he was 11 or 12 years old. After several attempts, Gene was able to run away from home without his father catching him. Working his way to the coast via trains and odd jobs, he was able to stow away on a ship called the Marta Russ in Norfolk, Virginia, which took him to Aberdeen, Scotland.

From there, Gene made his way down to Liverpool, where he was introduced to boxing and saw it as a means to earn enough money to get to France. Fighting as a welterweight under the nickname ‘The Sparrow,’ Gene toured around London fighting and performing in variety shows where he met famous fighters of the time, including Jack Johnson. Eventually the fighting tours brought him to Paris, where Gene finally settled down in the spring of 1914.

Gene was living in Paris when Archduke Franz Ferdinand was assassinated on June 28, 1914, pulling France and the rest of Europe into world war. Seeing most of his friends join the war effort, Gene enlisted in the French Foreign Legion on his 19th birthday. During his time with the Legion and later the 170th Infantry, he served as a machine gunner in the Second Battle of Artois and the Battle of Verdun, where he was wounded by an artillery shell.

While recovering from his injuries, Gene met an air commandant who recommended that he join the Air Service. They needed aerial machine gunners and Gene’s injuries prevented him from serving in the trenches. Before attending flight school, Gene argued with a friend over whether he could actually become a pilot, and they settled the matter with a $2,000 wager.

Reporting to flight school as a gunner trainee, Gene learned that he could become a pilot by joining a special squadron of American pilots, the Lafayette Escadrille. After being flight certified and granted leave in May 1917, Gene returned to Paris in his new aviation uniform to settle the bet with his friend.

Following his leave, a few thousand dollars richer, Gene attended aviation finishing school where he was briefly held back from frontline duty by Dr. Edmund Gros, a man with strong prejudices who would become a constant enemy. Despite this obstacle, Gene was assigned to Squadron N-93 on August 27. His first combat flight was on September 8, 1917 in a SPAD VII stenciled with the words “Tout Le Sange Qui Coule Est Rouge” or “All Blood That Flows is Red.” Gene eventually scored two probable aerial combat victories. Unfortunately, Dr. Gros used a conflict with a French officer to pull Gene back to the 170th, where due to his injuries he was assigned menial roles like guard duty, shuffling papers and janitorial duty.

After the war, Gene learned to play drums and performed at many clubs in France and Egypt. After briefly dipping back into the boxing world to earn extra money, Gene married a French woman with whom he had two daughters, though they divorced in 1935. Gene cofounded a club called Le Grand Duc (The Great Duke). Here, he rubbed shoulders with iconic artists of the time including Langston Hughes, Louis Armstrong, F. Scott Fitzgerald, Charlie Chaplin and Ernest Hemingway. The famed author even based a character on Gene in The Sun Also Rises.

Eventually, Gene earned enough money to found his own club called L’Escadrille
(The Squadron). When the Nazis rose to power in Germany, Bullard was recruited by the Deuxieme Bureau to spy on the German patrons who attended his club. This role almost cost him his life when a French gangster misinterpreted his actions and shot him, suspecting Bullard of being a Nazi agent.

When the Germans captured Paris, Gene once again fled white supremacist ideology, selling L'Escadrille and escaping to rejoin the French military. He soon found himself promoted to sergeant. His return to the fight was short lived, as he injured his back in an artillery blast. He eventually returned to New York City with the aid of the American Legion. Gene worked several odd jobs in the Big Apple, eventually saving enough to relocate his daughters to America.

Bullard was thrust into the nascent civil rights movement in 1949 while working security at a concert venue just outside NYC. The headliner, black singer Paul Robeson, was suspected by members of the local American Legion and Veterans of Foreign Wars posts to be a communist. They attacked the concert and beat up Bullard, not recognizing him as a fellow veteran. A photo of Gene, brutalized by VFW members, Legionnaires and the police, made headlines.

In the late 1950s, working as an elevator operator at Rockefeller Center, Gene was spotted wearing his war medals on his uniform by a Today show producer who arranged an on-air interview then and there. It turned out to be the first of many TV interviews about his exploits. French President Charles de Gaulle caught wind of Bullard and held a ceremony honoring him and his accomplishments.

Gene died of intestinal cancer on October 12, 1961. He was buried in the Federation of French War Veterans Cemetery in Flushing, Queens. Largely forgotten, his legacy is once again resurfacing. His home state of Georgia celebrates Eugene Bullard Day. The United States Air Force granted him a posthumous commission as a second lieutenant (though during his life the US military refused to let him join up). We are proud to help keep his story alive.