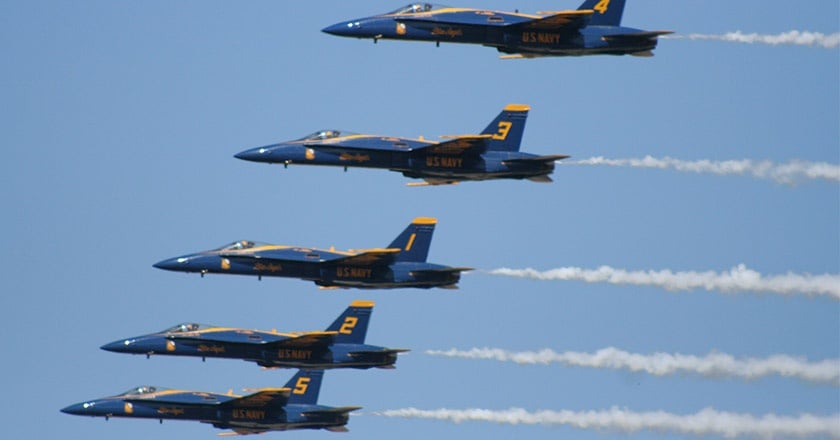 
Our favorite time of year here at the Museum is early August, when the Blue Angels come to visit. But before they land at Boeing Field, we want to help you get your Blue Angels fix by sharing some fascinating historical facts found in our library.

After World War II, the United States focused on hurrying back to business as usual. Rebuilding the economy and transitioning into peace time were the priorities, and attention shifted away from boosting the military. However, some Naval Aviators wanted to share their newfound skills in the skies with with people back home, so fleet Admiral Chester Y. Nimitz created a flight exhibition team to represent the Navy at air shows with a home base in Jacksonville, FL.

WWII ACE Butch Voris is widely known as the very first Navy Blue Angel. He was one of the Navy’s first qualified night fighter pilots. Voris was shot down in Guadalcanal, but his injuries didn't prevent him from putting on amazing air show!

In 1946, the Jax News (the local paper in Jacksonville, Florida) did some old-school crowdsourcing and ran a contest asking the community to help name this new air show team. Some of the submissions included: Com-bats; Death-Cheaters; Sky-Jackers; The Flying Buccaneers; The Sea Eagles; The Skyscrapers; Navy Cats: and, Strat-O-Cats (among others). None of the names seemed right, and the contest never produced a name that the team liked.

The first plane to fly with the Blue Angels was the Hellcat. It was powered by a 2,000hp Pratt and Whitney engine which ensured it could reach a 380 mph maximum speed and a nearly 3,000 feet per minute climb rate.

April 18, 1946 is commonly known to be the date when the Blue Angels were officially established. However, the Blue Angels like to celebrate their birthday in June, because they did their first public show on June 15th.

6. The Physics of Flight

The Blue Angels are known for incredibly precise formations that put the planes THISCLOSE together. The Blue Angels make these formations work with the help of physics. During their flights, a huge amount of air pressure builds up around the planes, creating a kind of cushion. When this happens, one plane can actually nudge against another causing it to move. Although the planes themselves don't touch, their cushions do.

When the Blue Angels are based in Pensacola, Florida, their practice itinerary is grueling, as is their travel schedule: the crew flies in shows all across the country for most of the year. In order for the team to put on a good show, they have to work together well. That's why the selection process for Blue Angels pilots is so extensive. Prospective applicants travel with the team to experience the work schedule, and the team has a chance to vet the applicants' personalities and temperaments.

In 1969, the Blue Angels starting flying the McDonnell-Douglas F4-J Phantom II. Built to intercept enemy aircraft, the Phantom II can go from standing start to four miles high in 48 seconds. More than 643,000 fasteners hold it together, and the Phantom required a support crew of 97, 35 of whom traveled to show sites.

Penny Edwards was the first ever enlisted woman to join the team in the 1978 season as an Aviation Electrician. It took some time, though, for women to enter the pilot's seat. In 2014, Katie Higgins became the first ever woman to be a Blue Angels pilot.

After the Phantom II came the McDonnell Douglas A-4 Skyhawk II, which had better maneuverability and could get closer to the crowds. It also moved better in small spaces and consumed less fuel than the twin engine Phantom.

Want to see the Blue Angels at our annual Jet Blast Bash celebration? Get your tickets today!