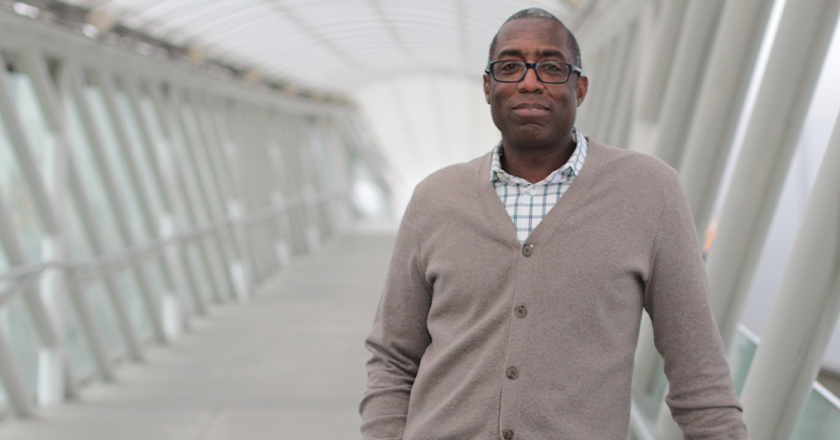 A photograph of Ron Limes on the Museum's pedestrian bridge.


The path from goal to achievement seldom follows a straight line. Both unforeseen challenges and unexpected opportunities can alter one’s intended route. Ron Limes is Director, Seattle Base Chief for Alaska Airlines, a Boeing 737 Captain, a Museum Trustee, an Air Force veteran and Chair of the Boeing Academy for STEM Learning and the Michael P. Anderson Memorial Aerospace Program (MPA) at the Museum. Despite his hectic schedule, Ron is a force for supporting those around him—spreading encouragement and helping clear the way for others to achieve their dreams.

Ron’s passion for flying was ignited in the fifth grade. “My teacher had his private pilot’s license and was an incredible storyteller. He brought in photos and shared tales of his flying adventures with the class,” recalled Ron. “I decided that flying a plane had to be one of the coolest things I could do.” From that point on, Ron had a singular focus. It was all airplanes and aviation.

Ron applied to and was accepted at only one college: Embry-Riddle Aeronautical University. Ron followed the advice of his high school guidance counselor, even though he was not familiar with Embry-Riddle. His parents sacrificed so that Ron could attend college, and he worked a number of part-time jobs to help defray expenses, including at Sears, Burger King and Holiday Inn. Ron graduated in four years, during which time he earned his pilot ratings.

While at Embry-Riddle, Ron joined the Air Force Reserve Officers Training Corps (AFROTC). He found the structure, order and camaraderie of the military appealing. Everything was highly competitive. Ron was initially passed over for the final flying slot in his cadet class, which left him feeling devastated. One of Ron’s mentors gave him this advice, “Hang in there. Don’t quit. There is another path for you to become a pilot.” These words gave Ron hope and motivated him to excel while at boot camp. Added Ron, “There are a lot of things that can take you off your path. If it is something you really want, find another way to reach your goal.” Ron went on to serve 26 years as a pilot in the United States Air Force.

In 1999, Harold “Mitch” Mitchell (now an Emeritus Trustee at the Museum) hired Ron at Alaska Airlines. “He took me under his wing and wherever he went, I went,” explained Ron. “One day, Mitch received a call from Dr. Bonnie Dunbar, former astronaut and then CEO of the Museum, asking about the Michael. P. Anderson statue in Spokane and whether the Museum could get one. Mitch asked Ron to help and that led Ron to the Museum.

“I had driven by hundreds of times, but never stopped. Once I saw the impact I could have on young people and the people I could associate with by volunteering at the Museum, it was an easy choice,” explained Ron.

The MPA Program encourages students of color in grades 6-8, from across Washington, to pursue studies in STEM-related fields and connects them with professional mentors of color who currently work in aviation and aerospace. The program is named in honor of Michael P. Anderson, a Spokane native and astronaut who perished aboard the Space Shuttle Columbia in 2003. “Once we had the statue at the Museum, we wanted to do more to honor Michael’s legacy and the idea for an education program was born,” said Ron. The first class was held in 2010.

In ten years, more than 1,000 scholars have gone through the MPA program. “One of the highlights of my experience,” said Ron, “is hearing from former participants, including one young man who recently wrote to tell me he was accepted to Embry-Riddle. That was a very special moment.”

“Because people have helped me throughout my life, I feel an obligation to help anyone that I can. In particular, Black Americans have helped me. There have been some giants who have paved the way for me,” explained Ron. “I stand on their shoulders. I am aware every day of those who helped make my success possible. I have very few obstacles in my way now. I want to make sure that the people coming behind me face even fewer obstacles than I faced.”

We are grateful for Ron’s gifts of time, talent, and treasure and his unwavering commitment to helping others succeed.

[Image Caption: Ron Limes, Director, Seattle Base Chief for Alaska Airlines, a Boeing 737 Captain, a Museum Trustee, an Air Force veteran and Chair of the Boeing Academy for STEM Learning and the Michael P. Anderson Memorial Aerospace Program (MPA) at The Museum of Flight, poses on the Museum's T. Evans Wyckoff Memorial Bridge.]