Being a Stewardess in the 1960s 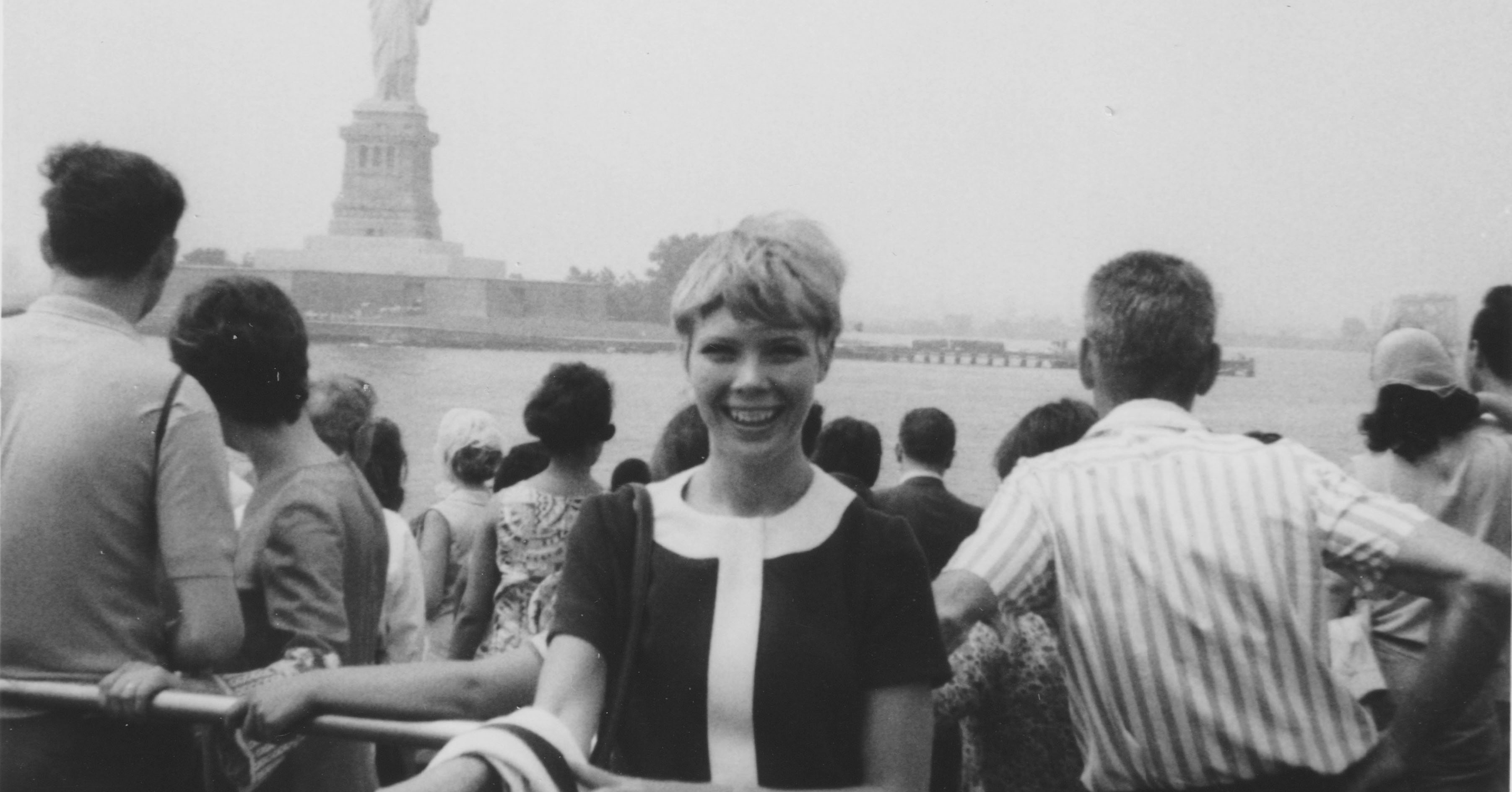 
“I just got hired by United Airlines to be a Stewardess.” My cousin proudly told me. Why don’t you apply?” So I did, was accepted, and two months later we boarded an airplane and flew off to Chicago for training. That was in 1968, when flying was a unique experience. The 1950’s and 1960’s were called the Golden Age of Flying, so-called because of the glamorous stewardesses, great meals (sometimes gourmet meals) and lots of legroom. Men wore three-piece suits and ties, ladies wore dresses, high heels and jewelry. A far cry from today’s flights and dress codes.

What did it take to become a Stewardess in 1968? Below is a list of United Airlines required qualifications:

Once an application had been accepted, an interview was conducted and you were informed if you were hired or not. (In 1968, only 1 in 30 applicants were hired). That was it!! No second or third interview, not even a resume (what is that?) was needed. The next step was a flight to Chicago for seven weeks of intense safety training on every type of aircraft flown by United, how to serve meals and a beverage service, and of course: grooming; make-up; and if you smoked, the proper way to smoke a cigarette.

Today’s requirements are a bit more complex. Now aspiring flight attendants are required to not only have the above basic requirements (although many have been changed to reflect today’s standards), but you also have to pass physical requirements, tests and interviews.

Some of the major changes of policy include the ability to be married, have children and the job is open to all who apply regardless of age, sex, race or social preferences. In 1968 only females were accepted. The attitude at the time was summed up by the Daily Press in Newport News, June 23, 1966: “To present a pleasing public image can be achieved only by an attractive girl.” An ad for United in 1967 boasted, “Marriage is fine! But shouldn’t you see the world first?” And Mary Wells, mastermind behind Braniff’s ad campaign, proudly told Business Week in 1967, “When a tired businessman gets on an airplane, we think he ought to be allowed to look at a pretty girl.” Things have certainly changed!!

Flying in the 60s and early 70s was fun. Because the “loads” were light we had time to enjoy our passengers. Many times I would sit down and play cards with a passenger. I remember carrying on a conversation with a very elderly man who told me how as a small child he came “Out West” with his family in a wagon train. Our flight training taught us to treat passengers like they were friends over for a get-together. When we could, we would.

We also had time to play jokes on each other. For example, the Boeing 727 was one of the airplanes that I flew many times. Of course, they were a bit different then as they are now. There were no overhead bins but open overhead racks, which only held coats and hats. One time I was helping train a new stewardess and we (with the help of the pilots) put her in the overhead rack to show her how much weight it could hold (not a usual training exercise). We left her up there for boarding. Being a professional stewardess, she calmly waved and smiled as each passenger came on. We did help her down when there was a break in the boarding process. Laughing, she swore she would get back at us.

Not every flight was enjoyable. I was working in First Class, busy serving drinks and taking meal orders. I approached one seat, took the gentleman’s order and asked his wife what she would like. There was no answer, figuring that she had not heard me I repeated the choices in a slightly louder voice. Again no answer, whereas the husband looked up at me and said,” My wife doesn’t speak to servants”. Thankfully not everyone who flew thought that way.

Flying was an adventure that was constantly changing with new uniforms, new planes and more people flying. In June of 1970, United started to fly the Boeing 747. New planes and routes were usually given to more senior stewardesses. Being a fairly new stewardess I did not have the seniority to fly on one until United acquired the Pacific routes from Pan American Airlines in 1986. As much as I enjoyed traveling within the United States, I now had the seniority to move to the International Base instead of the Domestic base, and with the new Pan Am routes United was not just a domestic airline anymore and my travel options greatly expanded. By now I was a Flight Attendant (the term Stewardess was changed to Flight Attendant at the end of 1970), could be married, have children and not worry about being older than 32. Since I qualified in all three categories it was a good thing that flying had changed since 1968.

During my time at United Airlines, I experienced severe turbulence, a cabin decompression, bomb threats (during the Vietnam War), a thwarted hijacking, and an emergency landing (landed safely). But despite all this, I had the opportunity to explore the world from Hong Kong, Tokyo and London to Mexico City, Guatemala and San Salvador. The places I’ve been to, the experiences I’ve had, and the friendships I’ve made over my 35-year career will be memories never to be replicated. I wouldn’t change a thing. I feel fortunate to have been a stewardess, and a flight attendant.

Lynda Eck – Lynda now is on The Museum of Flight team leading Premium Experiences on the Museum’s 747 and with Customer Service in the Museum Store. 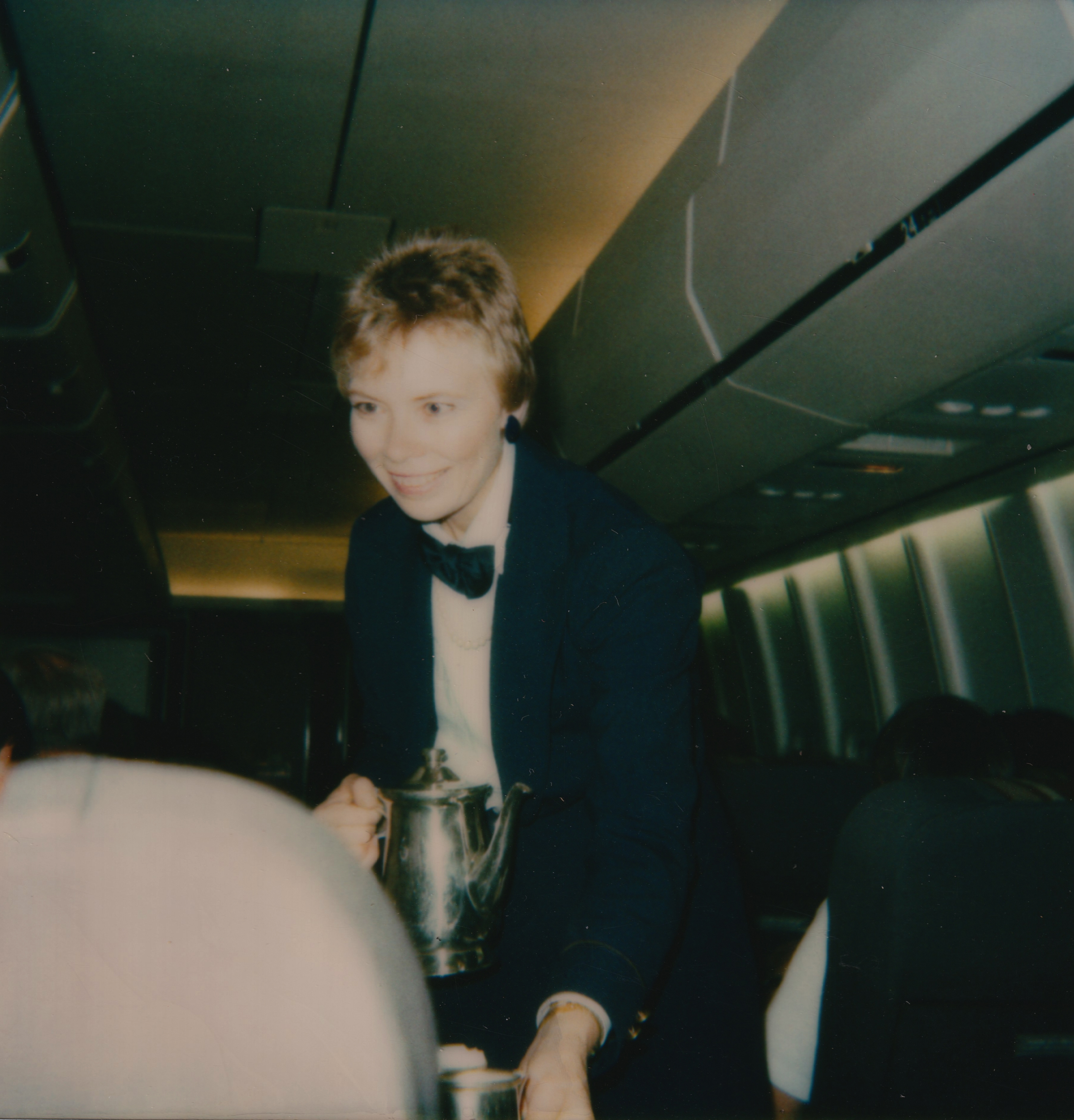 In-cabin Service with a Smile 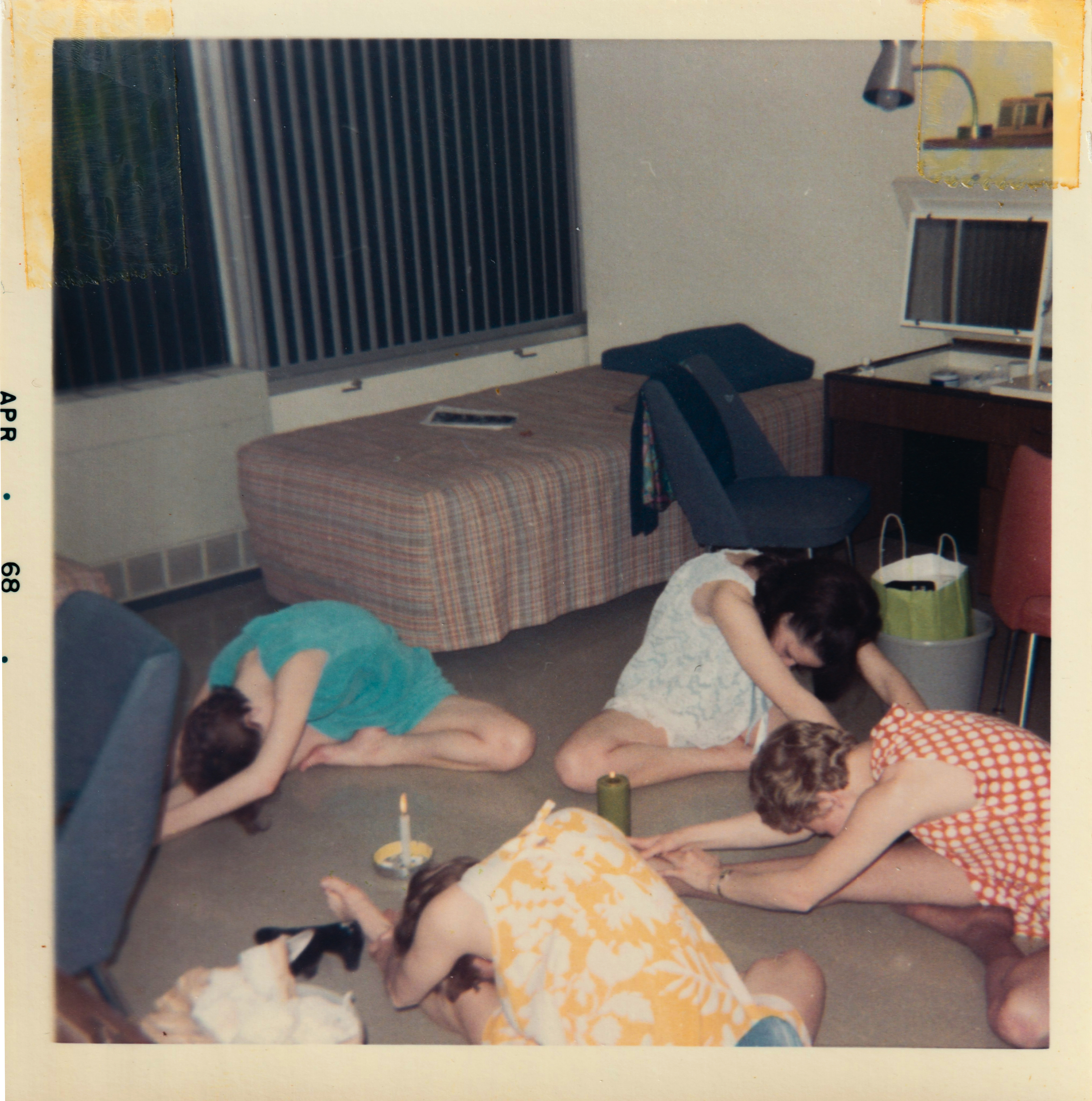 Doing our stretches while training in Chicago, 1968 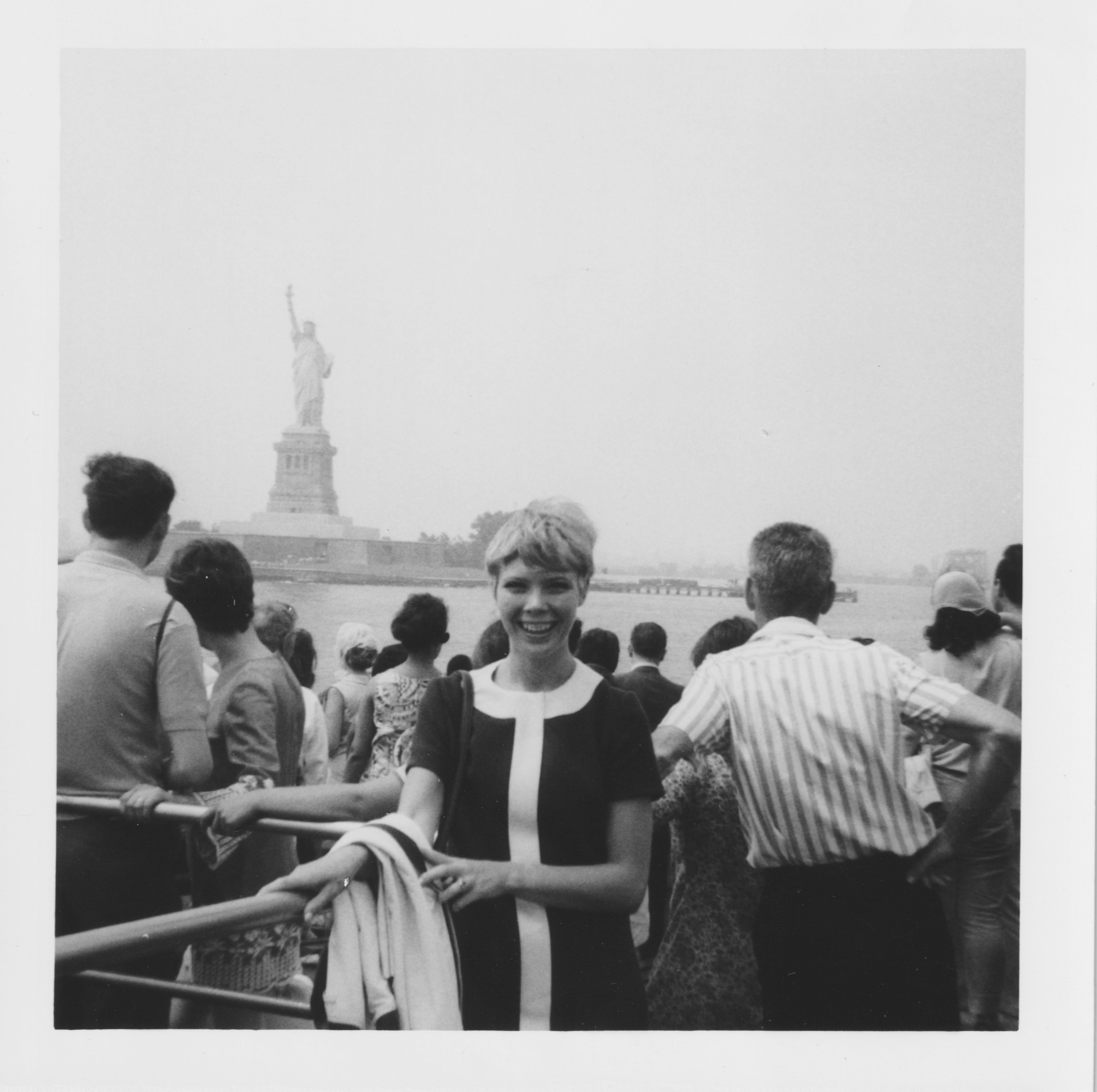 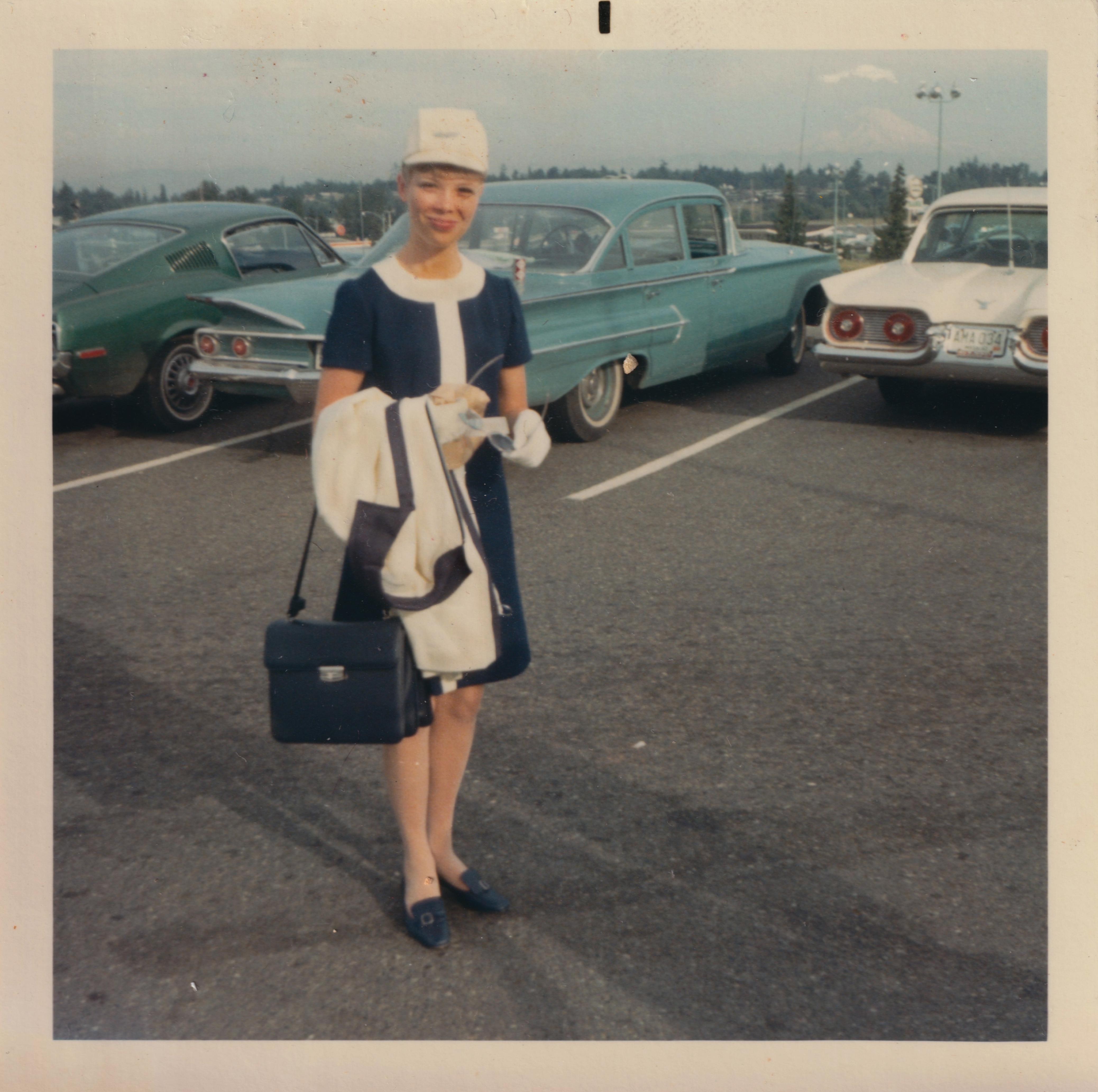 At the airport in my new United uniform, 1968 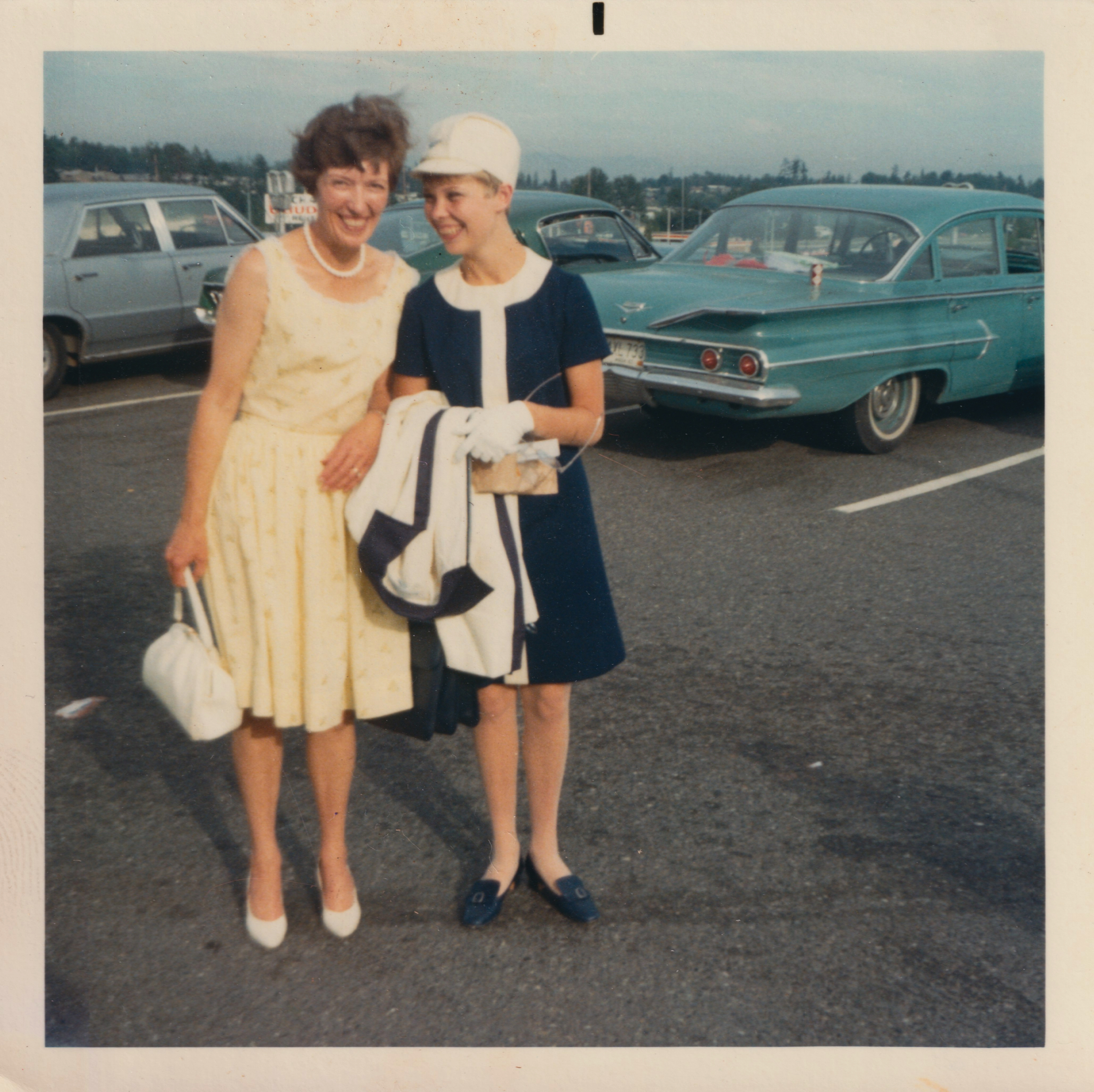 The New Stewardess and Proud Mom, 1968 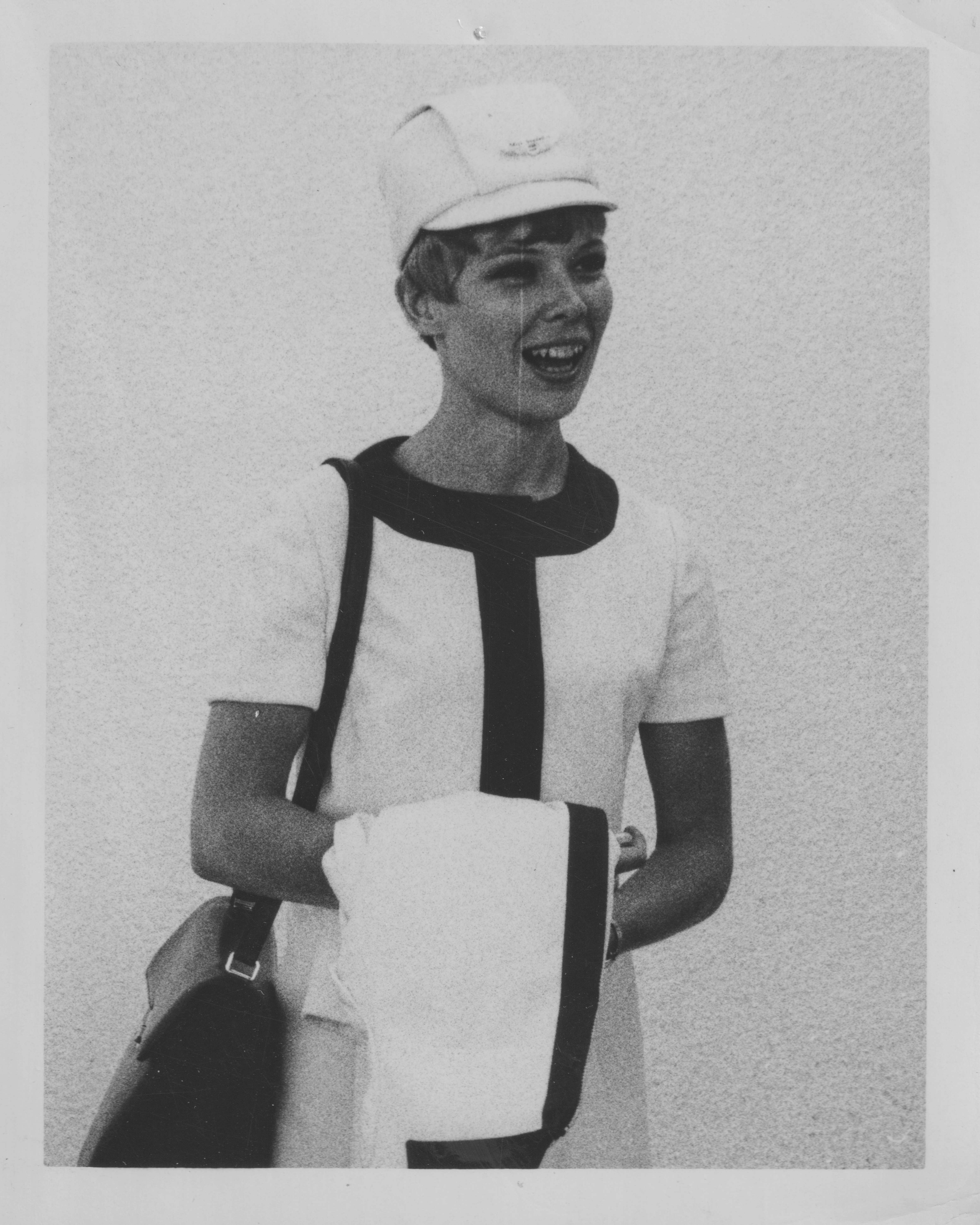