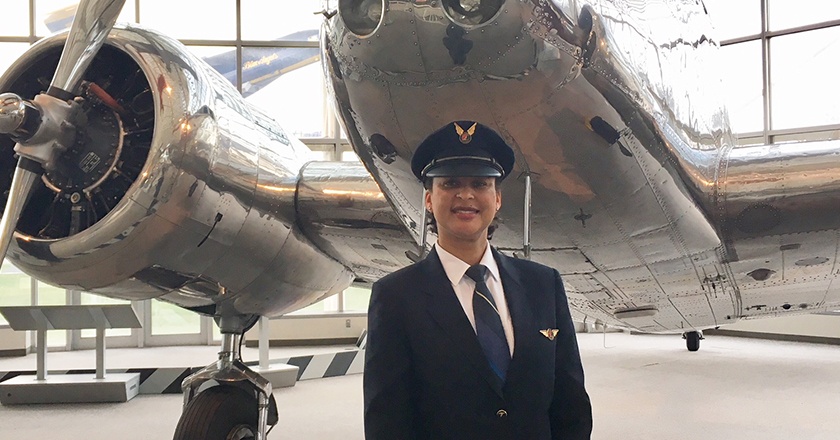 
As a black woman and professional pilot, Kim Ford exemplifies what happens when young people of color pursue their dreams of flight. Ford’s high-flying ambitions led her to a rewarding military and commercial pilot career that includes flying C-17 Globemasters and KC-135 stratotankers in the United States Air Force and serving as a First Officer for Alaska Airlines on a 737 based in Seattle.

Raised in the Bellevue area, Ford excelled in school and always dreamed of traveling and learning about other cultures. This dream was fueled by admiring old photos of her parents (her father was a Signal Corps officer in the Army) living in Europe before the Vietnam War. Seeing them in amazing places like Spain, France and Portugal and learning about her father’s service career inspired her to serve her country.

Ford’s trips to the airport with her mother to drop off her father were also formative experiences. “I would look down the jetway and always wonder what’s on the other side. I developed an interest and desire for flight and travel from all these things coming together.”

Ford’s dreams of flight landed her at the Air Force Academy in the mid-1980’s, where she faced obstacles that she hadn’t previously encountered. Although circumstances have improved since then, at that time there weren’t many women of color involved in the aviation industry.

“It was really intimidating to try to get into it. It’s not that people weren’t welcoming, it’s just that they wouldn’t necessarily look at a little African-American girl and think that she wanted to be a pilot.” With time, though, Ford got to know instructors, among them Tuskegee airmen, who taught her how to study and brought her up to speed with aircraft systems knowledge. “They helped me gain the focus and determination to achieve my goal.”

Reflecting on her success, Ford wishes that she had more confidence going into the Academy. “When I was younger, I spent a lot of time thinking about all of these issues that were holding me back,” she says. Now, Ford wants to let young people of color know how important it is to be confident about what you want to learn; and, she believes the aviation industry can learn a few things, too.  The industry needs to know that the obstacles young black women face are not always visible, and that it’s challenging being the only person of color in the room. “But I want people to know that we can succeed,” says Ford. “There are women of color in every aspect of the career field. We’re doing well, we love our jobs and we’re very capable.”

Ford adds that the aviation industry can also be more focused and intentional with reaching out to women of color who are interested in aviation: “Meet them where they are and make sure they are able to participate.” It’s also important that there are mentors to follow these young women as they continue on their career paths and give them opportunities to interact with higher level professionals, like pilots or executives. “Teach them and groom them from an early age,” Ford recommends, “so that young women of color know what steps they need to take to achieve their goals.”

For young people of color finding their way in the aviation industry, Ford recommends checking out the Organization of Black Aerospace Professionals, which has been instrumental in her own career path.

Want to support our next generation of pilots?