Quirks Of The First Jet Powered Air Force One 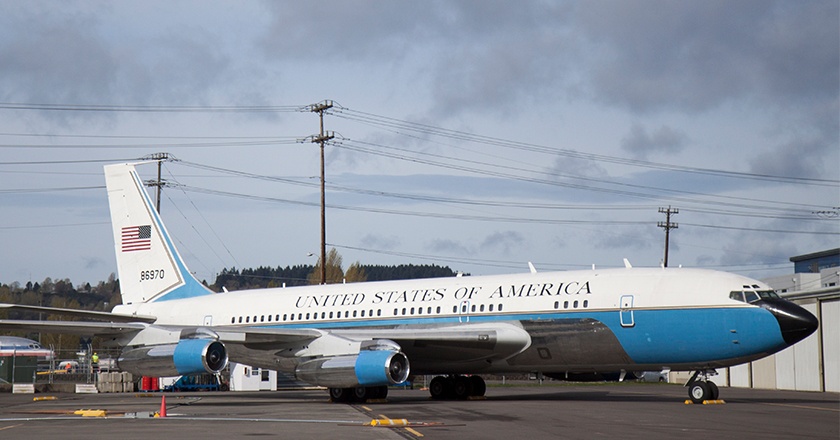 
The sleek blue, white and metallic livery of Air Force One makes it one of the most recognizable aircraft on the planet. But the plane that you’re most familiar with today is a sibling of Boeing VC-137B, the very first jet-powered presidential plane. This vintage command center and converted 707 has a few quirks of its own that say a lot about the Presidents who flew in it. Here are some of the most surprising features of VC-137B.

Did you know that VC-137B was a spy plane? Neither did President Eisenhower when he was flying on it! Early in its career, VC-137B was outfitted by the CIA to be a top-secret spy plane in a program code-named Operation Lida Rosewith an objective to spy on Soviet military installations during a trip Eisenhower was supposed to take to the Soviet Union in 1960. However, this trip never happened because Eisenhower had a bigger issue to confront: fallout over the Soviet military shooting down an American U-2 spy plane. Coincidentally, this incident with the U-2 was the impetus for the production of another iconic plane, the Lockheed Blackbird.

President Johnson loved his beagles and took them everywhere he could, including on Air Force One during his travels across the nation or abroad. The dogs could often be found lounging in the Conference Room, but the dogs would never sit still for long and would howl to be let out. So, Johnson ordered a doggie door to be built for the Conference Room to accommodate the restless nature of his canine companions.

Too Hot, Too Cold

President Johnson was finicky about room temperature and when he was VP and developed a habit of haranguing the flight crew about lowering or raising the cabin temperature. After a while the crew got tired of his shenanigans, so they installed a “fake” temperature control in the Conference Room. This appeasement was successful, and Johnson was so pleased with manipulating the controls himself that he didn’t even notice when the temperature remained the same.

Presidents Eisenhower was happy enough with the original interior and exterior décor of VC-137B, but once Kennedy took office, he and the First Lady realized it needed some upgrades. Some interior improvements were led by Jackie Kennedy, who directed the refurbishing of the Conference Room bathroom to give it more of a woman’s touch. As a couple, the Kennedys were not impressed with the plane’s military-inspired silver and orange livery, so Jackie Kennedy worked with French industrial designer Raymond Loewy to create a blue, white and metallic paint scheme. Jackie’s design still adorns the plane today—unless, of course, President Trump follows through with his own current ideas for a redesign.

The football goes wherever the president goes; well, the nuclear football, that is, and it has its own safe in Air Force One across from the Communications Room. The football is a briefcase that follows the President everywhere and is only used in dire national or global emergencies. Inside, the President can access the documents necessary for executing nuclear strikes.

Want to step inside our Air Force One? Take the tour now!