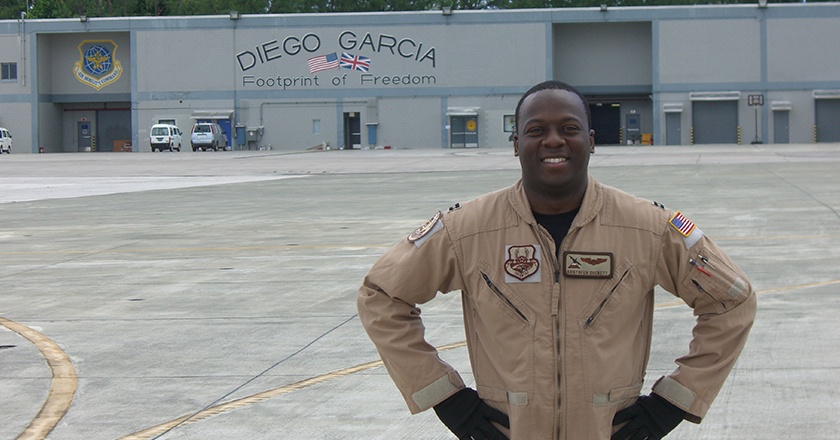 
Major Duckett’s dreams of flight began when he first saw a poster of an F-16 as a little boy growing up in New Orleans, Louisiana. At that moment, he set his sights on a pilot career and didn’t stray from that dream, no matter how difficult life became. Duckett’s mantra remains “Never stop dreaming. Set your goals, achieve them, and repeat.” In a speech during Michael P. Anderson Day, an event that brings together underserved youth to participate in aviation and aerospace activities, Duckett shows how he overcame obstacles like homelessness and racism to become one of the world’s few U-2 ‘Dragon Lady’ pilots.

During high school, Duckett faced bouts of homelessness that interfered with his graduating on time. Duckett realized the next best step for him to take would be to complete his GED, which he did by acing the exam in about 30 minutes. Still dreaming of becoming an Air Force pilot, Duckett was disappointed when he learned that the Air Force doesn’t accept incoming students who only have GEDs. He was still a few steps behind living his dream.

Duckett bounced back when he learned that the next best thing to joining the Air Force was enlisting in the Louisiana Air National Guard. “I became Senior Airman Kris Duckett. I was in the 159th Fighter Wing, working on ejection seats,” he explains. “But I remember saying to myself, ‘Man, I want to fly an F-16, how do I do that?’”

Duckett finally asked his supervisor what he could do to become a pilot. “The first thing he told me was ‘We can make you a pilot; you just need to come out hunting and fishing with the boys.’ I decided against that. I don’t look quite like the boys . . . Keep in mind, it was the south, and those boys may not be too nice to me. So that didn’t happen.” The second thing his supervisor mentioned ended up being a better idea, anyway. “He said I needed a degree to be an officer and a pilot. And the Guard pays 100% tuition to any state college. So, I applied and got into Louisiana Tech University to fly airplanes.”

Duckett excelled in his studies at Louisiana Tech and eventually became a navigator; then, he applied and was selected for pilot training and started flying C-130s. “It took a long time to get there and there were a lot of dreams that were crushed with regard to places to live, family, and things I wanted to do in life.” Despite the sacrifices he’s had to make, Duckett’s mantra has guided his life path.

His advice for aspiring pilots? “Dreams are the fuel for what you want to do. It’s that idea that will stick with you forever until you act on it. Once you figure out what that dream is, turn it into a goal by putting a timeline on it. Go achieve that goal, and once you achieve it, do it again.”

Want to help inspire the next generation of pilots?