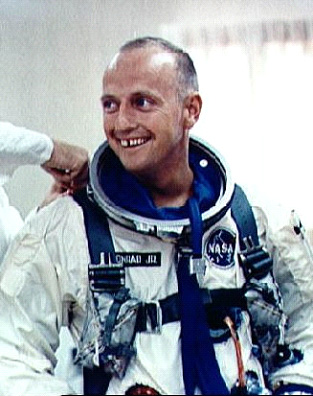 His first name was Charles, but everyone called him Pete.
Apollo 12 astronaut, Charles “Pete”Conrad was selected as part of NASA’s second class of astronauts, known as the “Next Nine.” An accomplished naval aviator with a degree in aeronautical engineering from Princeton, Conrad was known for his colorful personality and sense of humor.
A veteran of four space missions, Conrad’s astronaut career spanned the Gemini, Apollo and Skylab programs. He set space endurance and altitude records during his flights on Gemini V and XI. He also led the second Moon landing as commander of Apollo 12. On his final mission, he served as commander of Skylab 2, America’s first space station. But Conrad’s many achievements did not come easily. He had to overcome many obstacles on his road to the stars, including a significant learning disability.
A Challenging Childhood
As a young man growing up in Philadelphia, Pete Conrad struggled in school. Though he excelled at mechanical tasks,Pete had “dyslexia,” a learning disorder which made reading and writing difficult.When he was sixteen, Conrad was expelled from the very traditional Haverford School in Pennsylvania, where he was perceived as a poor student. He transferred to the more hands-on Darrow Boarding School. There, he made an amazing turnaround. By the time he graduated from Darrow in 1949 on a Navy scholarship to Princeton, Pete made the honor roll, was elected class president, and despite being the smallest guy on the squad, became captain of the football team.
From Jets to Rockets
Like most of the United States’ first astronauts, Pete Conrad began his career as a military aviator. He earned his naval aviator wings on September 24, 1954. He flew F9F-8 Cougars with squadron VF-43. He went on to attend the Navy Test Pilot School at Patuxent River, Maryland in 1958 and became a project pilot and flight instructor.
Conrad received an invitation to apply for the Mercury program in 1958. He and 31 other military test pilots went through a series of medical tests to selec tthe United States’ first astronauts. Pete grew frustrated with what he considered to be the overly intrusive nature of the testing, and was not shy about voicing his disapproval. This led the flight surgeons to deem his attitude "not fit for long duration space flight," rejecting him from the Mercury program.
Little did those doctors know that Pete would try again in 1962, and be selected for NASA’s second class of astronauts. He went on to set a space endurance record during his first Gemini mission, and again aboard the Skylab space station.He is perhaps best known as the commander of Apollo 12, the second mission to land on the Moon, and the first to make a precision landing. 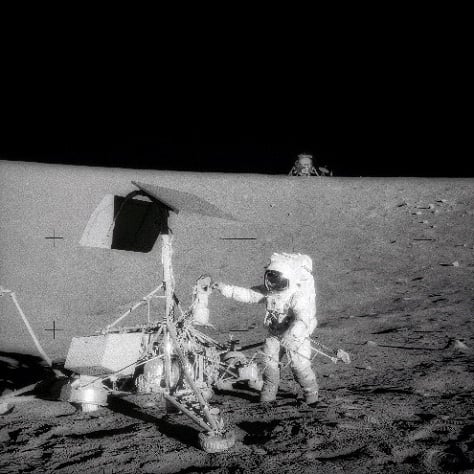 Though Pete's Apollo mission didn't bring a rover, later ones did, and the Museum has an engineering mock-up, built by Boeing in 1971. Find out more about it with our Senior Curator Matthew Burchette in our latest video.