Practice Makes Perfect: The Men Behind the Apollo 11 Recovery Mission 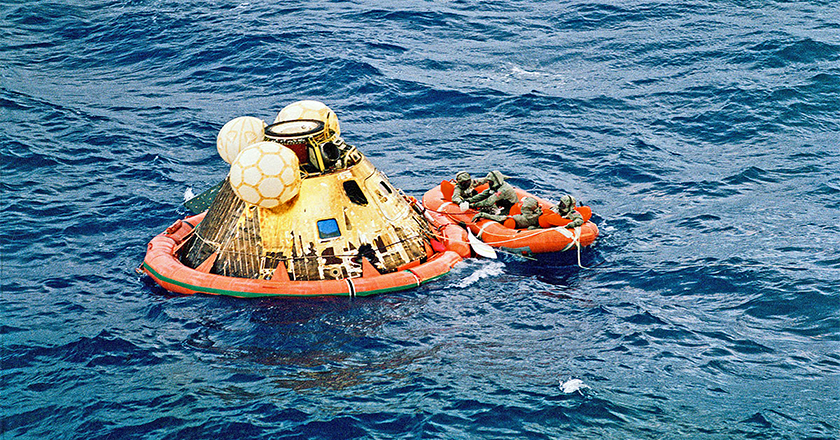 
The Apollo 11 Moon landing is regarded as one of the most incredible moments in human history. But after the Apollo 11 astronauts walked on the Moon, they returned to Earth in the command module Columbia and landed in the Pacific Ocean. The men who coordinated the Apollo 11 rescue mission have their own stories to share; stories that demonstrate a common thread that links everyone involved in the Apollo 11 mission: a commitment to perfection and excellence at all costs.

“I’m looking at this cloud that went all the way around us. We were caught between day and night. All of a sudden, the command module came through just like a meteor and I thought to myself ‘how beautiful,’” Clancy Hatleberg tells me over the phone in a breathless testimonial. “That’s the only moment of distraction I had that morning.”

Hatleberg, the lead Navy decontamination swimmer for the Apollo 11 recovery mission, didn’t have time for distractions on the morning of July 24, 1969, there in the pre-dawn light of the Pacific waters near Johnston Island. After allowing for that tiny moment of wonder, Hatleberg automatically reverted back to his training and the procedures he was assigned that day.

Hatleberg’s recollection of that morning is not too different from two other recovery team members—Bill Carpentier, the NASA flight surgeon, and Bruce Johnson, the Navy helicopter co-pilot—all of whom remember that day as the final evolution of a routine they had spent months practicing. The single-minded focus on their task kept them all from watching the actual landing. While the world watched Neil Armstrong take that one giant leap for mankind, these three men were immersed in rehearsing the routines that would ensure the Apollo 11 astronauts’ safe return to Earth.

Growing up in the pristine wilderness of Vancouver Island, Bill Carpentier never thought that his childhood spent swimming in local lakes would ever lead him to any history-making moments, but it was those summer days in the water, and his scuba diving hobby, that led him to be chosen as the flight surgeon for the Apollo 11 recovery mission. “NASA needed a flight surgeon who would be able to jump into the ocean along with UDT (underwater demolition team) swimmers in case astronauts needed medical assistance,” Bill says matter-of-factly. Before being hand-picked by NASA for the Apollo 11 recovery mission, Bill already had 4 years of experience with the agency as an expert in aerospace medicine.

He was recruited by NASA in 1965, just as the Gemini program was starting, to learn more about the medical conditions that astronauts experienced. “There were so many gaps in our knowledge and so many things we did not understand. We didn’t understand exactly what was happening in the human body and what could be done about it. We did have some common knowledge about orthostatic hypertension—when the heart rate increases and blood pressure decreases—during tilt table tests, but what was happening during space flight to cause it?,” Bill summarizes.

Along with learning the answers to these questions, Carpentier was tasked with leading the medical recovery operation. His time on the USS Hornet before the Apollo 11 splashdown was spent worrying about how to handle every possible medical emergency scenario that may arise—from dizziness and nausea to possible contamination from Moon-based microbes. Carpentier recalls, “My main job was recovery. My main concern was ‘Are they gonna be ok? Are we gonna be able to follow all quarantine procedures properly?' You can imagine his relief when he got thumbs up from all three astronauts when they got into the helicopter.

Carpentier stayed with the Apollo 11 astronauts for the 3 weeks of their quarantine program where he conducted a battery of tests on them each day to make sure there were no changes in body temperature or symptoms that could be suspicious. Carpentier remembers these 3 weeks as fairly routine and uneventful.

Helicopter co-pilot Bruce Johnson also remembers his work with Apollo as routine and uneventful. “I was doing what was drilled into my head for last month and half, making sure there were no glitches or problems and that everything went smoothly.” Johnson trained alongside Commander Don Jones of the Helicopter Anti-Submarine Squadron 4 starting in the spring of ’69 in the Bay of San Diego, where they practiced hovering above a boiler plate: “a big, steel representation of the capsule that they put in the water and had UDT swimmers come up and put the flotation ring around it. Then, we would hoist up some simulated astronauts.” They did this exercise over a dozen times, and then moved on to completing about 15 simulated recoveries off of Hawaii before July 24, 1969.

Johnson’s job involved calling out altitudes, monitoring instruments, and ensuring that the helicopter didn’t fly into the water. He wasn’t too worried about these tasks, but Commander Jones was very concerned about his control of the landing gears before touching down on the Hornet. “He asked me at least 6 times, in the 2 minutes it took to fly from the capsule to the ship. He didn’t want to land on the ship with landing gear up in front of whole world.” Fortunately, Johnson had practiced the maneuver enough times to where it became second nature, and the final recovery went exactly as planned.

The months of tedious practice wore on Clancy Hatleberg, a Navy Lieutenant who had just returned to the States from Vietnam. And he wasn’t shy about letting his NASA superior, John Stonesifer, know about his impatience with the process of training. “Once during training, I went up to him and said ‘Sir, we don’t need to practice in the morning and evening and daytime again. We got it down! We did Apollo 10, and besides we’re Naval special warfare—when things go bad we know how to improvise.’ And he looked at me, unbelieving, and said, ‘Lt. we’re NASA. We don’t improvise; we follow procedures. Get back in the water.”

This reaction from Stonesifer was a wake-up call for Hatleberg, who had trouble sleeping that night after the exchange with Stonesifer: “It dawned on me. Holy Toledo, we are the last part of the recovery evolution. Weare failure’s last option. And I’m the last guy that could screw this up. So I tell you, I got very, very serious very, very quick. I started to live my role.”

The day of the recovery, Clancy led the decontamination procedure by following all the steps he had practiced in the previous months: tossing the biological isolation garments (BIG) into the capsule; getting the astronauts into the raft; spraying down the capsule with betadine; and washing down the astronauts—now outfitted in the BIGs—with bleach, a step Clancy jokingly refers to as “rub-a-dub-dub, three men in a tub; splish-splash, we’re having a bath.” After the astronauts washed down Clancy to complete the decontamination cycle, he gave the helicopter a thumbs-up to alert the crew that the astronauts were ready to be lifted in the Billy Pugh net up to the helicopter, where they would be evaluated by Bill Carpentier and start the 2-minute flight to the USS Hornet.

Despite the moments of impatience with the rigorous NASA training protocol, Hatleberg looks back on his role as a life-changing moment: “Naval special warfare taught me never to quit on myself or quit on my teammates and finish every evolution and what NASA taught me was that you have to keep practicing what you’re good at or else you won’t be good at it anymore.”

Want to learn more about the space mission that changed the world? Check out our Destination Moon: The Apollo 11 Mission exhibit, now open until September 2!

*This article was originally published in Aloft magazine vol. 41, Issue 4.