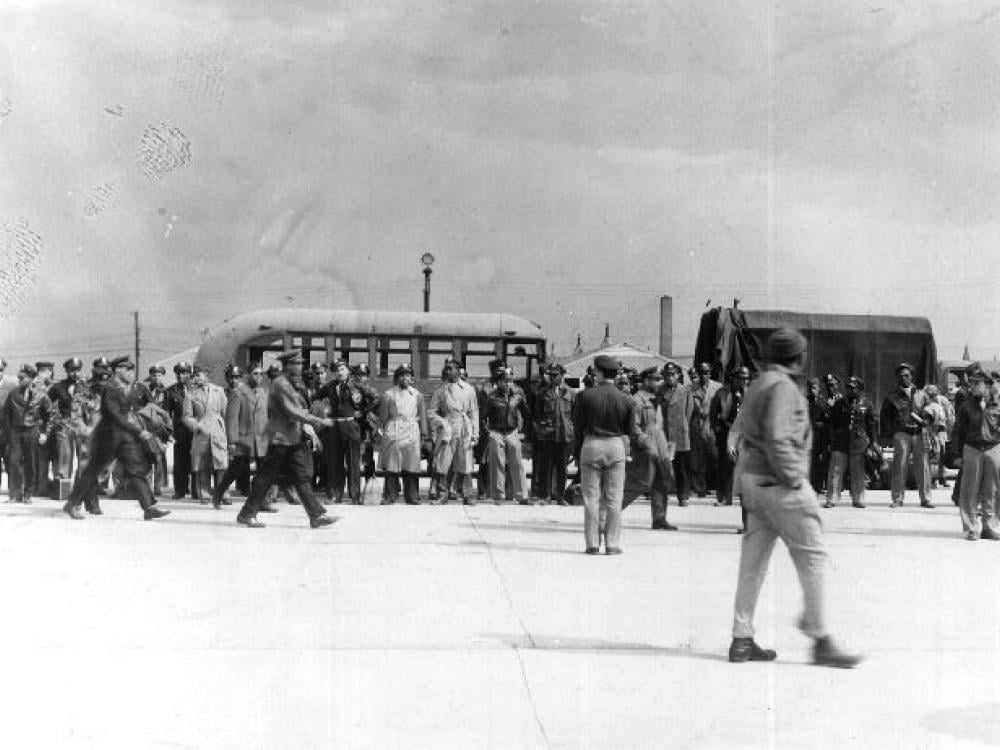 Black aviators waiting to be transported by bus after the Freeman Field Mutiny. Image: Library of Congress


While most associate the Tuskegee Airmen, the Black aviators of World War II, with fighter pilots, leaders in the Black community believed post-war aviation jobs lay with the multi-engine aircraft used by commercial airlines. They pressured the Army to create an Black bomber group, hoping the bomber pilots and navigators of the war effort would become the multi-engine pilots and navigators of the peacetime skies. Activated in January 1944 at Selfridge Army Air Field near Detroit, Michigan, the 477th Bombardment Group, flying B-25s, meant to fill this gap. While the 477th never saw combat, it is nonetheless remembered for a mutiny that set the stage for the Civil Rights Movement.

Problems beset the 477th from its inception. While White flight groups went from formation to combat in 5-9 months, by 1945, a year after their activation, the 477th was still not declared combat ready. This was not for lack of effort on the part of the aviators; the aviators logged over 14,000 hours before their first accident (which was not even attributed to crew error).

Rather, the issues faced by the 477th were the result of both systemic racism in the Army and general discrimination in wider American culture. Systemic racism, still a major issue today, occurs when racist ideology goes beyond individual discrimination and gets baked into the rules of a society so that even seemingly benign actions result in an ethnic group being disadvantaged.

In the case of the 477th, a major system at play was the Army Air Force’s education facilities. Since Black navigators and bombardiers could not train alongside their White counterparts, there were simply no places set up to train recruits for the new bomber group and shortages of crew plagued it through its history.

Racism in systems wasn’t the only problem; racist individuals played a major role. Major General Frank O. Hunter, commander of the First Air Force, and Colonel Robert R. Selway, the 477th’s White commander, both ravenously embraced segregation. Gen. Hunter declared there would be no “racial mixing” on bases under his command and Col. Selway, when he’d commanded one of the Tuskegee Airmen’s fighter groups, drew a line down the middle of a base movie theater to segregate the room.

Under Selway’s command, the unit progressed slowly. Like many who subscribe to racist ideology, he feared the possibility that the Blacks he benefited from subjugating would exercise some power. That fear drove him to move the 477th away from Selfridge Field as racial tensions in nearby Detroit escalated. The 477th relocated several times in a few months, implying the Army only half-heartedly supported the program, before settling at Freeman Air Field in Seymour, Indiana.

The multiple moves did nothing to help the delayed training schedule or morale.

In Seymour, the men of the bomber group faced even more explicit racism. Townsfolk viewed the men of the 477th with contempt, refusing service to them in businesses. On base, Selway labeled specific buildings for “Whites” and for “Coloreds.”

This would prove to be his undoing.

Army Regulation 210-10 required any public space open to officers on-base to be open to all officers. Introduced to discourage officers from creating exclusive cliques, Regulation 210-10 had the side effect of becoming a tool used by Black officers to push integration.
Attempting to circumvent Regulation 210-10, Selway created two groups of officers, “Trainees” and “Instructors.” Only Instructors were given access to the new Officer’s Club. The Trainees, of course, were the 400 Black officers of the 477th, while the Instructors consisted exclusively of the White officers on-base. This even though several of the “Trainees” were decorated veterans who had already completed a combat tour with the Tuskegee Airmen in Europe.

Morale reached rock bottom, and the Black officers did what Col. Selway most feared: they exercised their power.

About 30 minutes later a second group of Black officers attempted and were denied. Rather than leave, they moved the duty officer aside and entered anyway.

When they returned to the club the next night they were arrested.

Selway issued a memo formalizing segregation by race of the Officer’s Club, requiring all on-base to read and sign a document stating they understood the new official racial division. 101 of the Black officers refused and found themselves promptly arrested.
In refusing a direct order in a time of war, they faced a Court Martial with a maximum punishment of death.

The War Department dropped the charges against 98 of the 101 officers, stating they had been arrested improperly as Col. Selway's original policy was inconsistent with 210-10. Those released still received a formal reprimand in their official record.

The three remaining officers were tried. One, Lt. Roger Terry, was court martialed, fined, demoted, and dishonorably discharged for "jostling" an officer when entering the Officer's Club.

Neither Gen. Hunter nor Col. Selway faced trial for their illegal actions, but Selway was relieved of command of the 477th, replaced by Col. Benjamin O. Davis Jr., West Point’s fourth Black graduate.

The 477th’s victory for equality was quickly overshadowed as days later, Germany surrendered. While they never engaged a foreign enemy, these men faced a potent foe at home: entrenched racist ideology. Their victory was not one painted on the side of their aircraft; it was painted in the hearts of activists who continued this tradition of non-violent protest in the sit-ins and bus seat occupations of the subsequent Civil Rights Movement. Lost in the shuffle at the end of the war, their legacy remains largely forgotten, making the Freeman Field Mutiny one of World War II’s true untold stories.