Every Body in Flight 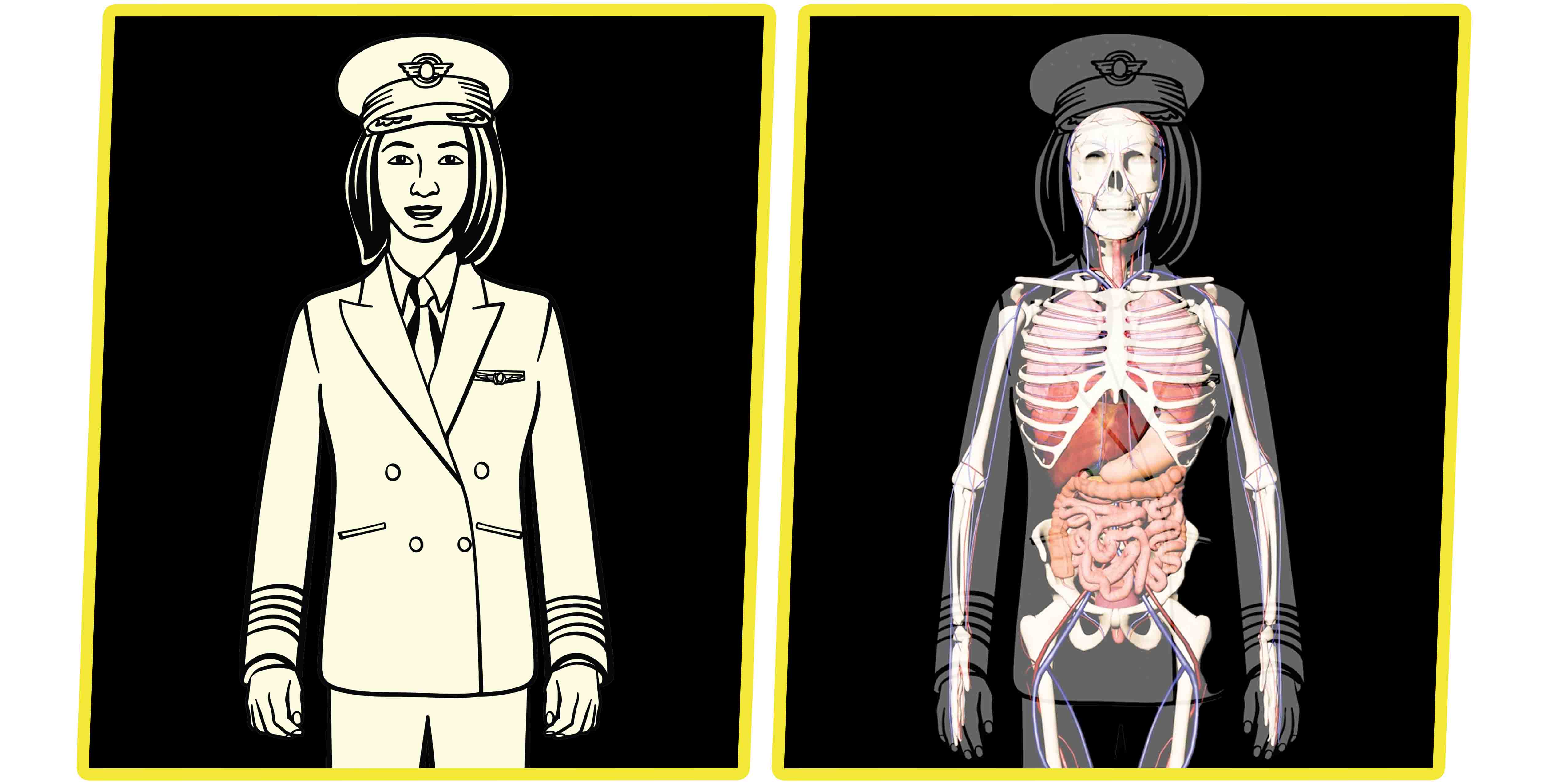 Figure representing Ari Fuji, superimposed over a skeleton to show how bodies are affected by flight.


As you enter the Stranger Than Fiction exhibit, you will encounter something truly strange and unique to the Museum—the projection of a life-size, human-anatomy figure in a video presentation called The Body In Flight Experience. Made up of equal parts comic-style illustrations and realistic 3D animations, the presentation provides a glimpse into what happens to the inner workings of the human body at high altitude, under accelerated forces, and for long durations in space. Beyond the informative (and at times creepy) presentation, its uniqueness to the Museum lies in the internal and external collaboration that led to its creation.

When the Museum’s Exhibits team begins the development phase for a new exhibit we actively seek out new ways of presenting stories not currently told in the Museum, new techniques in sharing complicated information through art and design, and opportunities to experiment with new technologies. All of this is done in the hopes of creating a dynamic, informal learning experience for our patrons. The Body in Flight project provided a new opportunity to combine all these elements into a single experience.

Geoff Nunn, the lead Exhibit Developer on the Stranger Than Fiction project, brainstormed a myriad of digital and hands-on interactives. Due to the COVID-19 pandemic, we had to focus our attention on hands-free experiences for our patrons’ safety, and with an accelerated deadline for this exhibit, we needed something that we could create in house. We landed on the concept of a single experience to demonstrate the effects that the extremes of flight have on the structures and functions of the human body. Inspired by the Visible Man and Woman toys of the 1960’s we began to brainstorm what this human anatomy experience would look like.

During our initial development discussions, we pitched the idea of the Body in Flight Experience to American physician and NASA Astronaut Michael Reed Barratt, M.D. As a member of this exhibit’s advisory group, Mike provided reference material of research compiled on the effects of long duration spaceflight and microgravity on the human body. Michael stated that a combined demonstration of all these effects had not been achieved by other institutions. This set the challenge for our team.

Our digital interactive development capabilities have grown over the course of the past decade, bringing much of the touchscreen and video production in-house to our Exhibits Team.

Michael Barratt’s challenge for our team was to come up with a way to demonstrate a multitude of effects on the body led us to seek a digital solution. Instead of a static graphic panel with all the information laid out at once, we created a series of animations demonstrating the effects on the body to try to simplify the visualization of these complex systems. We also wanted to retain the science-comic book style of the exhibit. So we created a video with a combination of illustrations and realistic imagery. 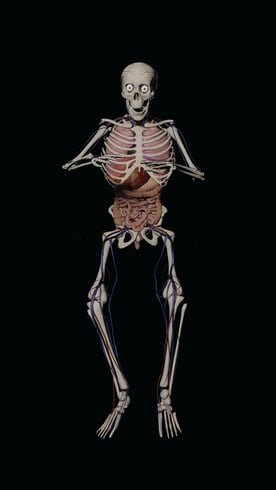 An early version of the skeleton, complete with eyeballs.

The realistic imagery in the Body in Flight Experience is from an anatomy skeleton developed by 3D artists at AVRspot. The Exhibits Team modified and animated the model and used it as a kit-of-parts to demonstrate the various changes to our internal organs and circulatory systems. The outcome is a bit unnerving when you see the skeleton rotate or move, but sometimes a touch of creepy illusion can help spark curiosity in the viewer. That being said, it was determined early on that we needed to reduce the level of creepy by eliminating the instances of eyeballs in the skeleton. You’re welcome.

The selection of the illustrated figures that overlay on the 3D models was also intentional. We needed illustrations of pilots and astronauts to overlay on the 3D anatomy figure. Mandy Faber, Graphic Designer for Stranger Than Fiction, aware of the under representation of women in the exhibit, chose real people to base her hand-drawn figures on. By selecting women to represent these figures, Mandy sought to reinforce the message that the entire Stranger Than Fiction exhibit is about what happens to everyone in flight. Though not called out by name in the presentation they represent the following real people:

The pilot, Ari Fuji: First female commercial pilot for a Japanese airline, with her first Pilot in Command in July 2010.

Another challenge was to find a video projector which could cast the life-size human figure while competing with the high ambient light levels in the Museum’s T.A. Wilson Great Gallery. We landed on a powerful short-throw projector to reduce the distance of the light source, as well as provide the proper viewing angle for visitors without having them block the screen. This prompted our team to find a solution for mounting this projector. Sune Sandling, our Exhibit Design Manager designed a wall encasement for the projector in collaboration with our Exhibit’s Fabrication Team and A/V technicians. Built by Exhibit Lead Preparator, Michael Thomas, the final wall encasing is a remarkable piece of furniture, sturdy enough to be re-used in future exhibits, allowing for more experiments in life-size projections.

The final unique touch to the Body in Flight Experience is in the music you will hear when you are up close to the projection. The song “Strangers in Flight,” composed for the exhibit by local musician and virtuoso creator Leeni Ramadan is the official soundtrack for the exhibit. The “Strangers in Flight” track pulls in a retro-electronic vibe that speaks to the weird science of aerospace medicine, past and present. Working with a local artist for the official soundtrack is a unique opportunity for this exhibit and the Museum. Take a listen to the track on the Museum’s website and check out Leeni’s other projects including her work as leader of the band Prom Queen.

Creating an exhibit is one of the most collaborative processes a Museum can undertake. In addition to the contributors mentioned in this article, there are many, many more whose efforts transformed this exhibit from concept to reality. The Museum wants to thank our exhibit sponsors: Bristol Myers Squibb-Presenting Sponsor and Kaiser Permanente-Supporting Sponsor. We gratefully acknowledge their investment in bringing the Stranger Than Fiction exhibit to life.

You can visit Stranger Than Fiction: The Incredible Science of Aerospace Medicine, now open through February 6, 2022.