Why Visitors Love Our "Destination Moon: The Apollo 11 Mission" Exhibit 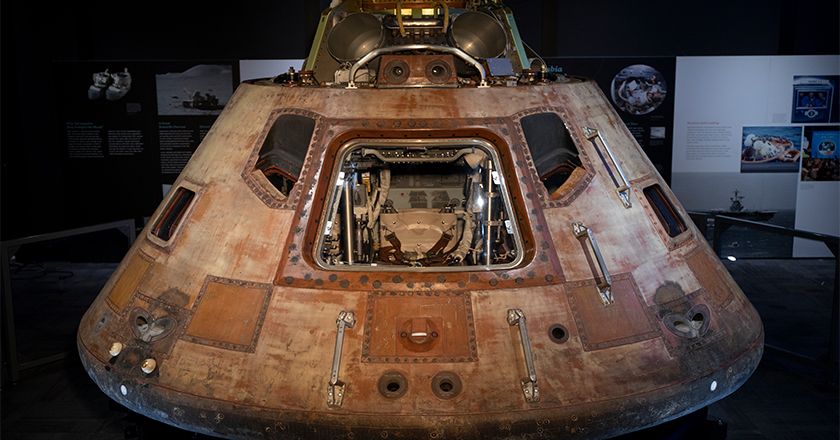 
Imagine the feeling of floating and seeing bright stars set against the inky darkness of the night sky. Imagine seeing the Earth’s curvature and the bright white of the Moon. You can experience all of this and more in our new exhibit Destination Moon: The Apollo 11 Mission!

The exhibit displays captivating artifacts from the first Moon landing in 1969, with the main attraction being the NASA Apollo 11 command module Columbia. Visitors can get up close to this special spacecraft and view the extensive controls and the tight spaces where the Apollo 11 astronauts were contained during their journey to and from the Moon. Destination Moon also includes rare objects like an early cosmonaut space suit, a Soviet Sputnik satellite, and the remains of the rocket engines that blasted Apollo missions to the moon. These F-1 engine parts were recovered from an Atlantic Ocean underwater expedition planned by Amazon and Blue Origin founder Jeff Bezos.

With its 1960s-themed design and photography, Destination Moon takes visitors on a nostalgic journey to the Space Race and fully portrays the urgency the US felt in order to be the first nation to land on the Moon. Museum Gallery Ambassador Steve Hanley believes that some of the older visitors are compelled to see the exhibit for nostalgic reasons. "At a certain age, people watched the Moon launch, and everybody wants to come and see Columbia because it is still a world icon. It is something people can enjoy, no matter what their age.” The spacecraft that transported the first humans to the Moon and back is also Steve's favorite part of the exhibit because it represents human ingenuity, innovation, and determination.

One visitor chimed in after Steve shared his thoughts. “The exhibit is fascinating," she said. "The Museum does a great job portraying many different aspects of the Moon landing and it is very informative. I also like that it is very interactive and kid friendly.” 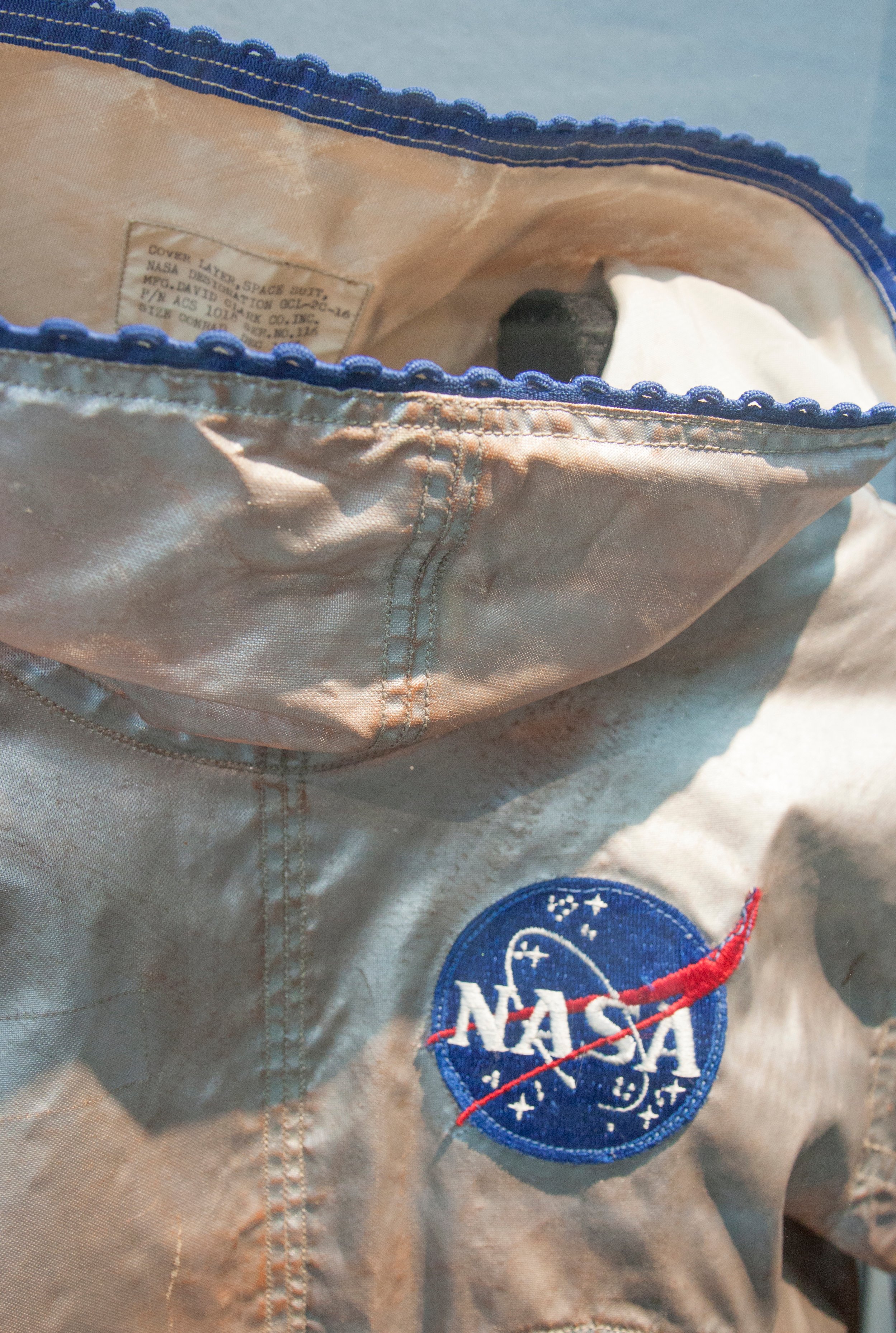 The Moon landing was made possible by technologies and instruments designed to ensure the astronauts' safety. The pressure suits were critical to providing a survivable environment for astronauts during periods of extra vehicular activity or during unpressurized spacecraft operation.

The Lunar Roving Vehicle replica seen below was developed to meet the demands of lunar exploration. It featured computerized navigation, a portable television system capable of sending color images back to Earth via satellite, the ability to carry four times its weight, and wheels capable of navigating the difficult lunar surface.

Finally, the main attraction can be seen in the very last portion of the exhibit. The Columbia, pictured below, stands over 10 feet tall and bears the marks of the extreme heat it generated as it fell through the Earth's atmosphere and splashed into the Pacific Ocean on July 23, 1969. It is accompanied by interactives and displays for visitors to explore.

Destination Moon, and its interesting artifacts and interactive components, is only at the Museum until September 2, 2019, so plan your trip today!

Destination Moon: The Apollo 11 Mission is organized by the National Air and Space Museum and the Smithsonian Institution Traveling Exhibition Service. The exhibition is made possible by the support of Jeff and MacKenzie Bezos, Joe Clark, Bruce R. McCaw Family Foundation, the Charles and Lisa Simonyi Fund for Arts and Sciences, John and Susann Norton, and Gregory D. and Jennifer Walston Johnson. Transportation services for Destination Moon are provided by FedEx. 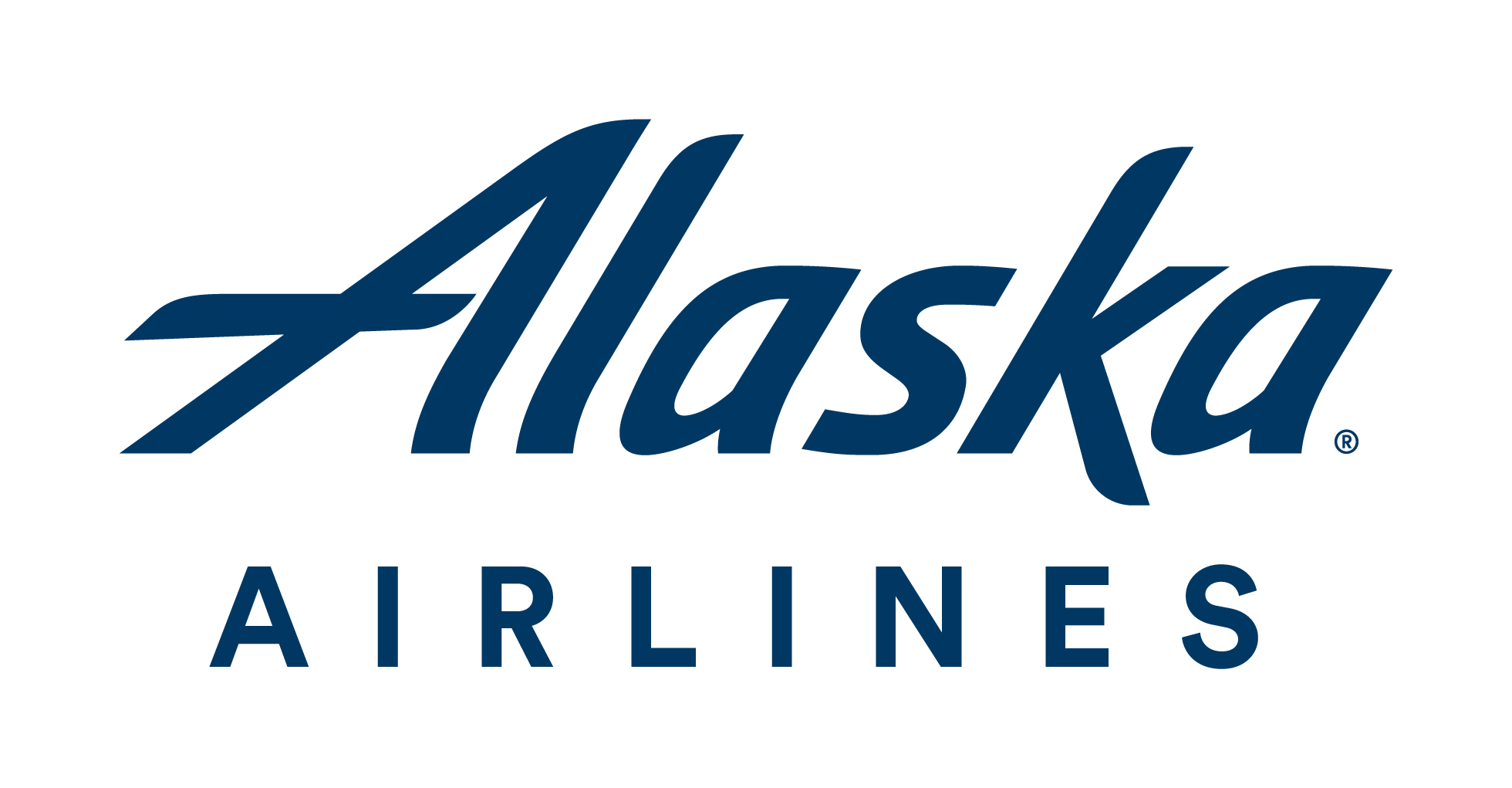 Sponsor of Washington Goes to Space