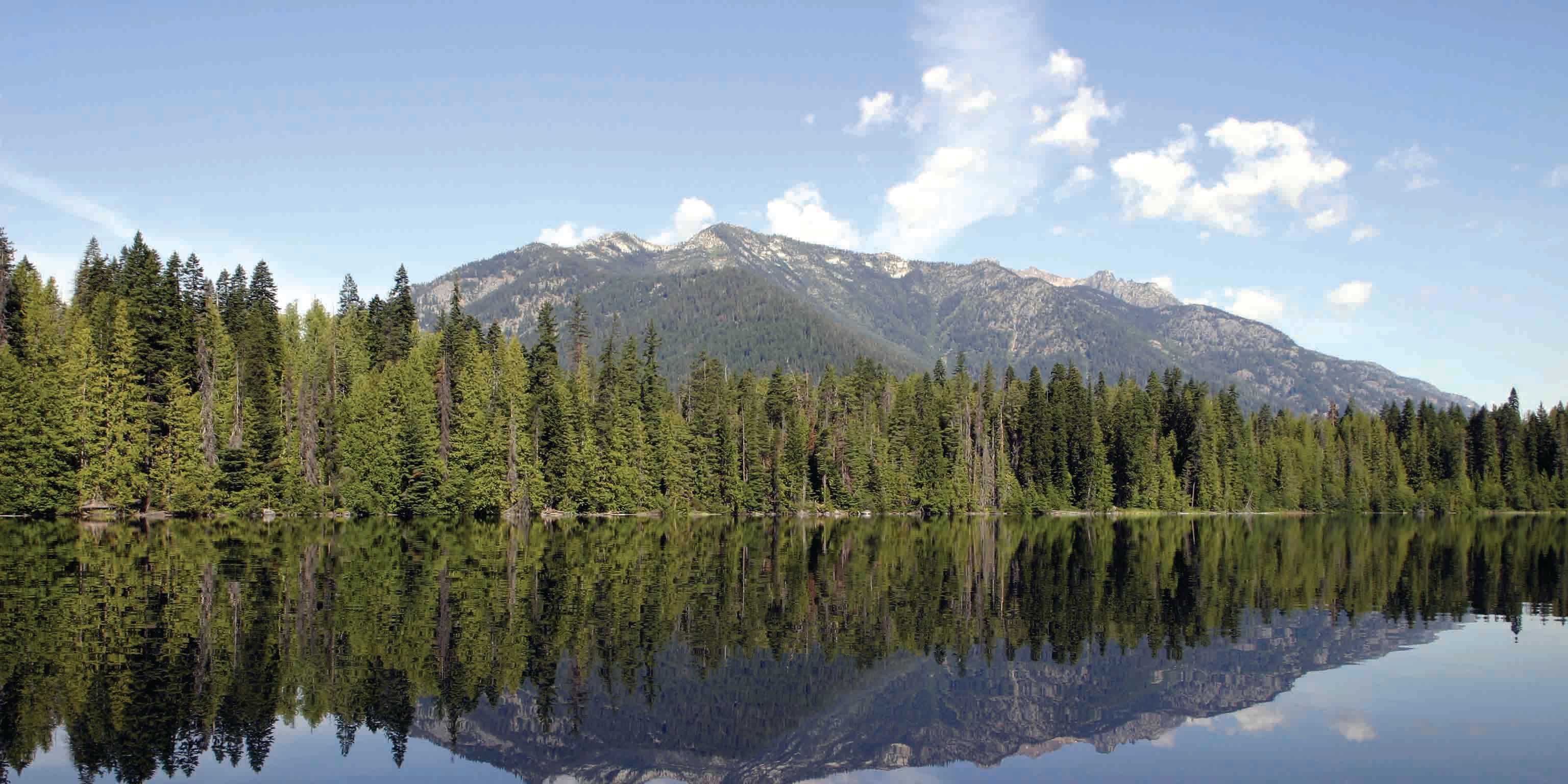 Evergreens and mountains are reflected in the serene waters of Domke Lake.


The pilot focused on the ridgeline ahead, aiming for a break in the trees that dotted the jagged crest. Just beyond was the target—Domke Lake. As the small plane zipped past the tall evergreens, it made a steep dive and sped over the placid surface of the lake. Suddenly, a large cloud of mist erupted from the bottom of the aircraft. Hundreds of gallons of water poured from its belly as well as wriggling fingerlings—two-inch long trout. The tiny fish tumbled lazily through the mountain air into the lake while the pilot set course for the next lake a few miles away.

During the late Pleistocene epoch, the movement of glaciers across North America created high mountain lakes, which were cut off from any downstream invasion by physical barriers, meaning the vast majority of America's western mountain lakes were barren of fish. As the West was settled in the second half of the 19th century, trout were gradually introduced into these lakes. Initial introductions were made by cattlemen, miners, and sportsmen, followed by simple governmental programs in the late 1800s and early 1900s.

As times changed, government agencies took a larger role in stocking lakes. At the Mount Shasta Hatchery in northern California, the first attempt consisted of fingerling rainbow trout, often transported in railroad cars. As the "fish cars" pulled into stations, sportsmen met them to ask for cans of fish. The sportsmen then hiked the cans of live fish to their favorite lake and let them go. Later, as the operation became more organized, the young fish were transported to their new homes via horseback or truck. With the end of World War II, airplanes and helicopters became readily available, and stocking shifted from ground transportation to aircraft, leading to greater efficiency, reduced cost and greater reliability.

About 1,600 lakes in Western Washington are considered "high" lakes, at elevations of 2,500 feet above sea level or higher. East of the Cascades, nearly 950 lakes lie above 3,500 feet. Only a small percentage of the lakes have introduced fish populations. Some have self-sustaining trout populations, while others are stocked periodically. Domke and Twin Lakes in Chelan County are aerially stocked with 40,000 to 60,000 fingerling rainbow trout between the two water bodies. However, the majority of Washington's high elevation lakes remain fishless.

The Washington Department of Fish and Wildlife has also turned to drones to help manage and maintain our state's wildlife. Drones are used for a variety of tasks that larger aircraft cannot accomplish. For example, in late 2020 and early 2021, the Department used a small quadcopter to gather information on the mouths and lower sections of the Alder and Deer Creeks in preparation for a new fish release site. In addition to aerial surveying, the Department also uses its small drone fleet to count elk populations, identify salmon spawning redds and even take pictures of migratory waterfowl to determine migration patterns.

One of Washington's most ambitious aerial wildlife management projects involves a group of renegade mountain goats on the Olympic Peninsula. Mountain goats are not native to Olympic National Park. During the 1920s, Alaskan hunters introduced about a dozen of the fuzzy white eating machines to the area. At one point, the population ballooned to over 1,000, causing "ecological mayhem" as they grazed on rare alpine plants and eroded the landscape.

In 2018, the National Park Service and the Washington Department of Fish and Wildlife teamed up to begin relocating goats to 12 different sites in the North Cascades to combat the goats destructive behavior. As their name implies, Mountain Goats are found in high-altitude habitats, which can exceed elevations of 13,000 feet, although they usually stay above the treeline most of the year. Their natural love of high rocky crags makes them easy to locate but difficult to catch. That's where the helicopter comes in. The crew finds the goats, and a marksman onboard shoots a net or tranquilizing dart at the selected animal. Then a "mugger" hops out to subdue the animal. The crew then slings the animal beneath the helicopter and flies it to a staging area where they are flown or trucked to the Cascades. As of this summer, the program has captured over 50 percent of the Olympic herd and is bringing the project to a close.

Even more outlandish are the parachuting beavers of Idaho. Yes, you read that right—parachuting beavers. In the 1940s, to even out the beaver population and put their dam-building skills to work in the backcountry, Idaho Fish and Game decided to airdrop beavers as a cost-effective way to distribute the animals to the state's more remote areas. A 1949 Popular Mechanics article read in part:

"Dropping the beavers by parachute is a new experiment, and more than 3 of the animals have been dropped successfully to date. It's a tricky operation, and it takes a skilled mountain pilot to pick out the stream selected for the drop and get down to within a couple hundred feet of the ground. . . Usually, the 'chute lands within a hundred feet or so of the stream. A male and female are planted close together on the same stream so that a new colony may be started."

The uneven distribution of beavers was causing a problem in the state. In overpopulated areas, they were damaging the land with their dams, and in underpopulated areas, water needs weren't being met. As early as 1939, the Department of the Interior had been trapping beavers and releasing them in eroded areas so they would build dams and promote a more even distribution of water. The cost of trapping and transplanting a beaver—$8. The estimated value of one beaver's work—$300.

Although Idaho has not had "parabeavers" since the 1950s, many states continue to use aerial assets to manage wildlife, with UAVs becoming more prevalent every year. The next time you take a hike, make sure you look up when you hear a plane. You might see something amazing.