Stories from an HC-130 Pilot 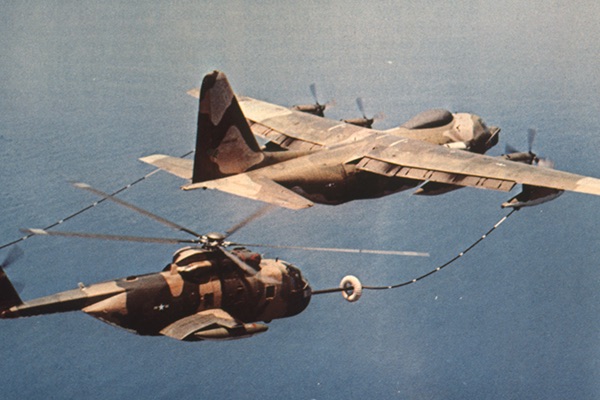 
The Lockheed C-130 (and its variant, the KC-130, pictured above) is an amazing craft that takes a brave and adaptable crew to pilot and maintain it. Phil Adelman is one man who had what it took to guide this giant of the skies during the Vietnam War, when he flew 225 missions in the HC-130. Adelman’s experiences in the HC-130 Hercules—a plane that can adapt to any mission, whether that be rescue, communications or a gunship—along with some adventures in a B-52—demonstrate how unpredictable the life of a pilot could be during the Vietnam War.

A Life on the Move

If you’ve been in the armed services, or know someone who has, then you know how often servicemembers move as they are called to respond to the military’s needs. Adelman began one of many journeys as a service member in 1958 when he enlisted in the USAF and began basic training at Lackland Air Force Base. Soon after, he transitioned to Keesler AFB in Biloxi, Mississippi and began training as an electronic- countermeasures technician. After graduation, he was transferred to Phoenix and began working at the Phoenix Bomb Plot. One of his tasks was jamming bomber radar equipment: Phoenix was used as a target and bomber crews would be graded on their ability to hit a specific target (not with real bombs, of course!)

While in Phoenix, he applied for Officer Candidate School (OCS). He attended OCS at Lackland AFB, Texas, then Undergraduate Navigator training at Harlingen AFB, Texas, and subsequently Bombardier training at Mather AFB in Sacramento, California. He was then assigned as a B-52 Navigator at Westover AFB, Massachusetts.

One of his earliest missions was Operation Chrome Dome after the Cuban Missile Crisis. In an effort to show the U.S.S.R that the U.S. was always ready to defend itself, the U.S. military ordered 24/7 flights around the Mediterranean, the North Pole and the Northern Pacific with B-52 aircraft equipped with nuclear weapons.

“We would take off at noon in B-52s from Westover, Massachusetts, fly across the Atlantic, refuel with KC-135 tankers and then orbit the Mediterranean, going north and south, so Russian radars knew we were there loaded with nuclear weapons. We would come back over Spain and pick up more tankers, then fly back to Westover landing exactly 24 hours after we took off,” Adelman explains. During the Cold War, pilots and crew were on alert one week at a time in what was called a “mole hole” underground shelter with B-52s parked within sprinting distance should any international incidents arise. 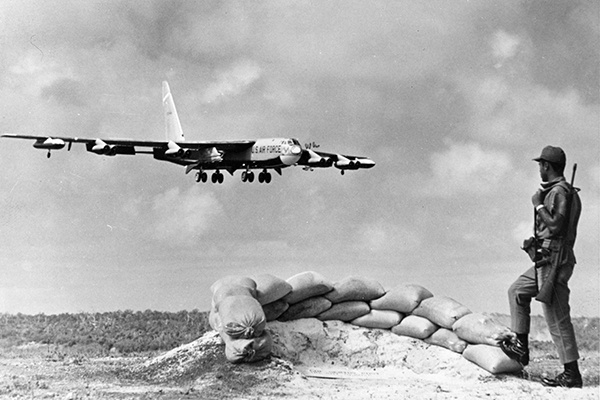 While Operation Chrome Dome felt fairly routine, Adelman got the shock of his life during a B-52 training run over Westover, when he was positioned as a Navigator and several headquarters officers were getting their quarterly training.  “The navigation seat on the B-52 is above the emergency hatch,” Adelman explains. “If something happens and there’s extra people they can bail out of the navigation hatch. And if you’re flying with people who are evaluating crew, then they sit on jump seats. They’re not actually in an ejection seat, so if something happens they have to bail out of the navigator’s hatch.”

One of the headquarter trainees, a Lieutenant Colonel, was eating lunch by sitting on the floor behind the navigator’s seat. During lunch, a piece of the Colonel’s clothing somehow caught on the hatch jettison handle. “It lifted and blew him and the hatch out of the airplane. I look down and have 35,000 feet of air under me. And I’m in an active ejection seat because when the hatch goes, it pulls a safety pin out of the ejection seat.” Very slowly, carefully, and barely moving a muscle, Adelman put on his oxygen mask and told the crew that his hatch and the Colonel were gone, and everyone should get on oxygen.

Luckily, the Colonel was wearing a parachute that opened automatically at 10,000 feet. He was found high up in a tree with a broken arm and no memory of how he got there.

The crew and Adelman made it back to Westover in one piece and the crew chief managed to put a pin in Adelman’s seat to ensure he wouldn’t be ejected.

After spending three years as a B-52 Navigator, Adelman applied for and completed undergraduate pilot training at Laredo AFB, Texas and C-130 training in Tennessee. He subsequently spent three years as an HC-130 rescue pilot in Bermuda and was then transferred to Vietnam.

A Typical Week in Vietnam

During Adelman’s stint in Vietnam from 1969-1970 he was part of the 39thAir Rescue Squadron based in Tuy Hoa, halfway between Da Nang and Cam Ranh Bay. Life on base followed a routine in which he flew the HC-130 to refuel HH-3 and HH-53 Jolly Green Giant helicopters that had rescued crew members who had been shot down.

Monday: He and the crew would rise before dawn and get a briefing while the flight engineers readied the plane and load masters prepared the cargo. They would start the C-130 engines and check out all of the aircraft equipment to make sure it works and park it in a revetment. Then, they would stand ready to be the refueling aircraft if a mission broke.

Tuesday: Adelman and his team would follow the same procedure as Monday, but instead take off an hour before sunrise to orbit until 12:30 or 1:00 P.M. and remain in the air until they were needed. If aircraft were shot down in their area, the HC-130 would assume the role of commanding and coordinating the rescue mission.

Wednesday: Followed by a rare chance to sleep in, Adelman and his crew relieve the morning aircraft and would orbit during the afternoon shift.

Thursday: Usually an off day.

Friday: Another alert day, but this time the crew would fly to Udorn Royal Thai Air Base, Thailand.

Sunday: Fly the afternoon rescue orbit over Thailand. They would then land in Thailand, pick up their crew chief and fly back to Tuy Hoa. They would then have Monday off and begin the weekly schedule again on Tuesday.

This rigorous schedule was necessary to ensure that rescue missions could operate effectively. The HC-130 crew was responsible for directing and coordinating the rescue mission between Headquarters, forward air controllers, fighter aircraft, rescue helicopters and refueling tankers.

One HC-130 incident that Adelman will never forget begins with a rather mundane flight over Thailand, bordering Laos, that was interrupted by his load master. Adelman remembers, “He just came right up to the cockpit and was so scared he was stuttering: ‘We-we-we- have a fire!’” In the back of the plane next to the fuel tanks, there was smoke pouring out of the wall. Adelman and his crew tried to cut power to the location of the smoke and the load master picked up the fire extinguisher.

Finally, down to battery operations, the HC-130 wasn’t appearing to be suffering from an electrical short because it would have popped a circuit breaker. After landing, the maintenance crew inspected the wall next to the fuel tanks to discover the source: a wire junction box had not been secured. The aircraft was missing a piece of equipment that was going to be attached in the future. In neglecting to secure the junction box, the manufacturer created a situation that could have been worse had the crew not responded so quickly. It turned out that the rest of the HC-130 fleet had also been wired incorrectly, but Adelman’s plane was the only one that experienced a fire. A maintenance fix was ordered for all aircraft in the fleet.

Want to hear more stories from pilots who flew during the Vietnam War?

Check out our new exhibit, Vietnam Divided: The War Above Southeast Asia.