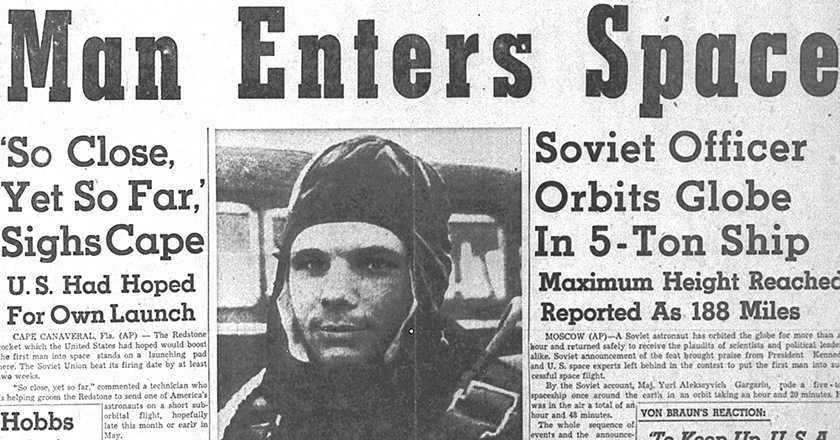 
On April 12, 1961, Soviet cosmonaut Yuri Gagarin became the first human to go to space. His achievement paved the way for future space flights both in Russia and the United States, and we celebrate this historic moment every year with Yuri’s Night. But did you know his life was fascinating before he orbited the Earth? Here are some of the best quotes from his biography, Road to the Stars (Moscow, 1962).

Full disclosure: his retelling is transcribed by N. Denisov and S. Borzenko, writers for Pravda, the official Soviet newspaper (or propaganda machine, depending on how you look at it).

Imagine happening upon a plane crash and meeting two fighter pilots who escaped the wreckage. This is exactly what happened to Gagarin when he was a child living in the small village of Klushino during WWII. When he and his friends walked over to the downed plane, Gagarin saw that the pilots had “unbuttoned their leather jackets and we saw the medals that gleamed on their tunics, also the first I had ever seen. And then we boys realized the price that has to be paid for military decorations” (9).

In 1951, Gagarin moved to Saratov (about 560 miles southeast of Moscow) to work in a machine factory and attended the Saratov Industrial Technical School (now renamed Yuri Gagarin State Technical University of Saratov). Gagarin’s interest in spaceflight grew so quickly he compared it to an infection: “I became infected with a new disease, a disease the medicine has not yet found a name for—the irresistible urge to reach outer space. It was a vague, not fully recognized feeling, but it remained with me, bothered me and gave me no rest” (36).

Stoked on by this irresistible urge, Gagarin enrolled in flying classes. Unsurprisingly, he was more excited about getting in the sky than sitting behind a desk and learning theory: “We began, of course, with the theory of flight, the structure of an aircraft and its engine. For some time, we were even a bit disappointed by these boring lectures. We had thought we would go straight to the aerodrome and start flying” (37).

With Gagarin’s first flying classes came his first parachute jump, when he panicked because it seemed like his chute was taking too long to unfurl. This frightening experience taught him an important lesson: “When you are in the air never doubt your equipment and don’t make hasty decisions” (40-41).

Gagarin describes his first solo flight at Oremburg Flying School as the merging of man and machine: “I became part of the machine as a horseman probably feels one with his horse when he is riding at a stretch gallop. All the parts of the machine became transmitters of my will; the machine was obedient to my wishes and did whatever I wanted it to” (46).

Although he had every necessary qualification to enter cosmonaut camp, Gagarin felt insecure around the men he was commissioned with: “I am rather lacking in inches, I look a bit frail and cannot boast outstanding biceps. Some of the lads who were at the commission with me were not only tall, broad-shouldered and the very picture of health, they were simply bursting with vitality” (101).

During training, one of Gagarin’s most challenging physical experiences in camp involved rotations in the centrifuge: “The pressure was terrific! The eyes would not close, breathing was difficult, the muscles of the face were all twisted, the number of heartbeats increased, blood pressure also increased and the blood became as heavy as mercury” (113).

Training also included psychological challenges, such as “long stays in a specially equipped soundproof chamber” designed to test a trainee’s neuropsychic stability (124). Gagarin describes the extent of this isolation: “Sometimes you had to spend days on end in an isolated space of limited volume where you were completely cut off from the world. Not a sound, not a rustle. No movement of the air. Nothing, no one to speak to. From time to time, according to a certain schedule, you must send a radio message. This communication is one-sided. You send a message and do not know whether it has been received. You get no answer from anybody. And whatever happens nobody will come to your rescue. You are alone, absolutely alone and only yourself to rely on” (124).

Gagarin excelled in training and was awarded the coveted spot aboard Vostok 1, where he enjoyed the feeling of weightlessness during his historic flight: “I felt wonderful when the gravity pull began to disappear. I suddenly found I could do things much more easily than before. And it seemed as though my hands and legs and my whole body did not belong to me. They did not weigh anything. You neither sit nor lie, but just keep floating in the cabin. All the loose objects likewise float in the air and you watch them as in a dream” (152).

A strange thing happened when he emerged from Vostok’s landing in an area of rural Russia: “I saw a woman and a girl. They were standing beside a spotted calf and gazing at me with curiosity. I started walking towards them and they began to walk towards me. But the nearer they got to me the slower their steps became. I was still wearing my flaming orange spacesuit and they were probably frightened by it. They had never seen anything like it before” (161). Indeed, nobody did, but after Gagarin’s landing the orange astronaut suit became a much more familiar sight.