Vietnam War Pilots and the Planes They Flew


Jerry Coy and Jay Fontaine served during the Vietnam War and flew the O-2A and the F-4. Their experiences flying during the war have left indelible marks on their memories, which they shared during conversations at the opening of the Vietnam Veterans Memorial Park in May 2019. The centerpiece of the park is a B-52 Stratofortress flown during Operation Linebacker II, and the park serves as a place for veterans, their families, and the general public to reflect upon the sacrifices of those who fought during the Vietnam War. The stories of Jerry Coy and Jay Fontaine are just two of the many stories shared during the park's grand opening.

Jerry Coy joined the military through an Air Force ROTC program in college before joining the war efforts in Vietnam, where he served as a tactical air support pilot as well as a forward air controller (FAC) to direct ground troop movements from the air.

When he was stationed in Laos, operating on the Ho Chi Minh Trail--the main conduit for North Vietnamese troops and supplies coming into South Vietnam--he directed ground troop movements from the air and operated small turbine-powered observation aircraft. He served with a Green Beret group (they were not squadron strength, just six enlisted men and a staff sergeant) flying the O-2A.

One day, he had gone out to check on the three squadrons that were out in the field. Visibility was poor, with the cloud ceiling being so low that most fighters wouldn’t fly. Coy checked in with his first group, and they had dire news. They were completely surrounded by enemy forces, with one injured crew member. They couldn't identify their location, so he wasn’t able to fly directly toward them. He started flying in a zigzag toward their general direction. After a while, the commander of the ground forces said that Coy was right over them. Coy then marked their position and fired rockets about 150 yards away from where his troops were. “Keep doing that, you’re drawing all of their fire,” he recalls the commander saying. Coy soon cleared a path to where they could escape. He called in two UH-1 (Huey) helicopter gunships to lift the men out of the jungle--each of them wore a harness that allowed them to be lifted up-- and assist with enemy suppression.

These men made a hasty retreat from their position, trying to get to a spot where the helicopters could land. Each soldier hauled a 150-pound backpacks, and the injured crew member had to be carried. The commander who was carrying him was likely carrying 300 pounds or more. And as if that wasn’t enough, they couldn’t find a spot for the helicopters to land.

The helicopters were finally able to haul the men up using wires and pulleys, and everyone got back fine. All was accomplished within an hour.

Coy was awarded a Silver Star for his actions, the second-highest honor that an armed forces member can earn, which was unusual for people operating in Laos: the U.S. military would never admit that it operated there. This veil of secrecy around U.S. military operations in Laos prevented one of Coy's colleagues from receiving a medal of honor that he deserved for many years until the operations were declassified.

At the same time that Jerry Coy was serving as a FAC in Laos, Jay Fontaine, a radar intercept officer, was stationed on the USS Coral Sea after being a student at the naval academy.

“On May 27, 1972, we were ordered to go photograph a target in North Vietnam, which was rather unusual,” he said, recalling a mission when he flew an F-4. 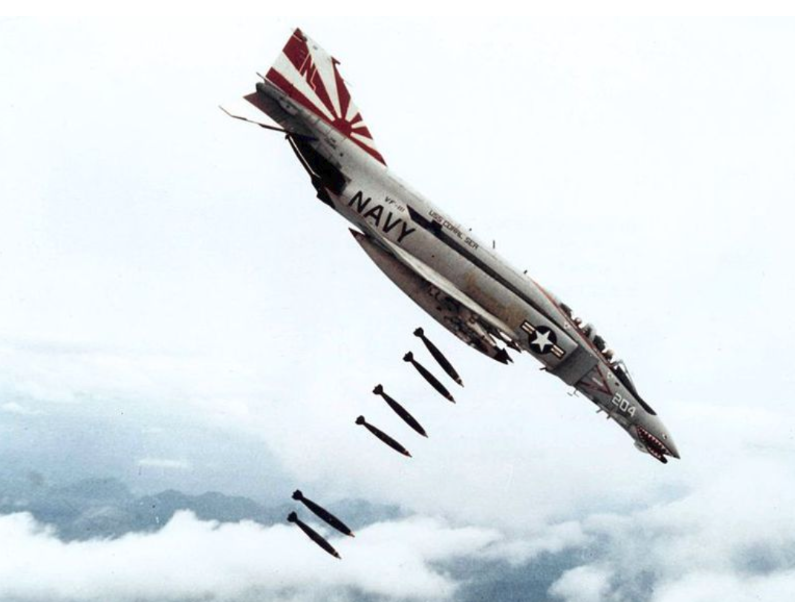 “What made it even more interesting, and possibly quite dangerous, is the bay that we had to approach it from. The bay was full of these limestone pillars, jutting up from the water like little mountains. They were stark pillars of rock provided great cover, but most of the air defenses were reportedly in and around Haiphong itself. Also, we thought that the area was quite heavily defended from air attacks since Operation Linebacker had commenced there about a month prior. But when we got into the target area, there was no one there. We just weaved in and out of these limestone islands heading to our target. This lack of air defenses was incredibly helpful to us since our primary mission was combat air patrol and ground attack. The F-4’s were also not equipped for photo reconnaissance, and we were using handheld cameras. If there had been active air defenses, it would have made the workload much larger for both the pilot and the radar intercept officer.”

The Museum of Flight is dedicated to preserving stories such as these for future generations. Come check out the F-4 Phantom, and other Vietnam-era aircraft on display, and talk to the docents! They may not all have served in Vietnam, but they all had very interesting careers in the aviation and aerospace field, and are happy to talk about it.

Plan your visit to the Museum today!