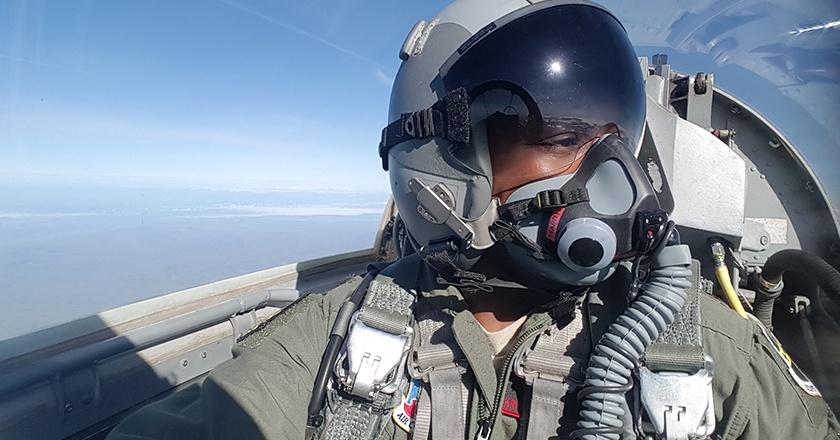 
Imagine breathing 100% oxygen, strapping into an astronaut-like suit, and then flying 60,000 feet above the Earth for nine to ten hours. This is what pilots do when they fly a Lockheed U-2 high-altitude reconnaissance aircraft. As an elite group of about 50 pilots at any one time, U-2 pilots are skilled endurance aviators who support ground operations with aerial eavesdropping. But what is it like prepping for and completing a reconnaissance mission in a U-2? Maj. Kristofer W. Duckett, who has been flying a U-2 for over a year, explains some of the finer points.

The day before a flight, the pilot and the mobile officer discuss mission details that have already been laid out by mission planners. This discussion with the mobils is critical because pilots, unlike unmanned aircraft, must fully understand the mission in order to fly the route. According to Duckett, “If an unmanned aircraft loses its computer link, it’s got to be programmed to do something. As a U-2 pilot, I am the computer, so I can still fly the airplane and bring it back home.”

Once Duckett understands the mission plan, he gets a full night of rest to be mentally and physically prepared for a long nine to eleven hour flight.

When Duckett arrives for duty the next morning, the first person he sees is the mobile officer and they touch base on the mission plan and emergency response protocol. After their discussion, Duckett meets with the PSD (Physiological Support Division) to prepare his/her body for the demanding flight. “You can’t wear dog tags or watches, and you’re literally in long-johns,” Duckett explains. “I will come out and the suit is laid out on the floor with boots and everything. There’s five or six people waiting to help me dress and I dive into the suit.” 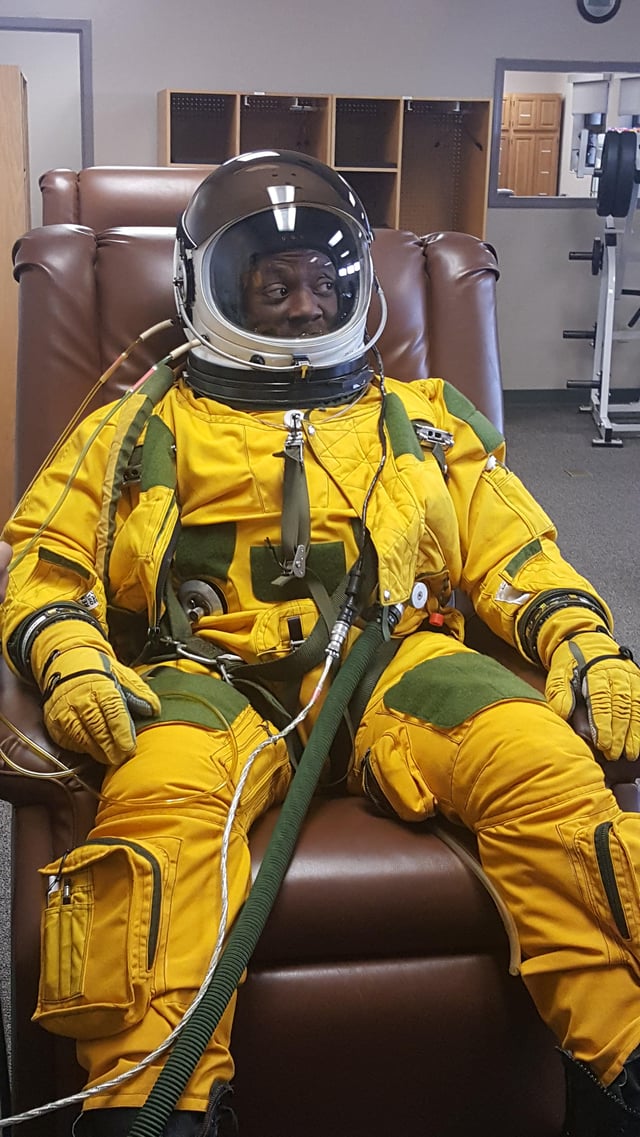 After the apparel dive, Duckett gets comfortable in a large recliner as the PSD puts on his gloves and helmet. He then is attached to a machine that helps him breathe 100% oxygen; this is when he tends to fall asleep. Regardless of how relaxing a moment this may be, it’s essential to preparing his body for the flight. “There are things that happen at 60,000 ft that aren’t conducive to life.”

Rubbing the nose of the plane before flying is a U-2 pilot tradition. “You need to pet your plane because you want the Dragon Lady to be nice to you that day," Duckett explains. "We call her the Dragon Lady because she can show up one of two ways. You can have a really nice flight, where everything goes well and she’s a lady. But then there’s those times where something goes wrong and she wants to reach up and bite you. That’s when she turns into a Dragon Lady.” When the Dragon Lady is unhappy, she can make landings especially difficult.

Then, all the crew members salute the pilot. This is done with every flight, even training sessions.

After climbing into the cockpit, the PSD integrates Duckett into the airplane. “Cables go around my feet that hook me up into the ejection seat, and I have an oxygen hose that needs to be connected to the airplane.”

When the U-2 finally takes flight the wheels under the wings, called pogos, fall off. The U-2 needs to shed every extra pound possible in order to soar to over 60,000 feet. During his flight, Duckett follows the mission plan and eats what he calls “Tube Food,” minced meals like apple pie, beef stew and chocolate pudding that are delivered through a plastic tube inserted in his helmet.

After this gourmet meal, Duckett lands the U-2. “Landing the airplane is where U-2 guys make our money!” Because those pogos have already fallen off, landing the U-2 is like landing a bicycle.

“The U-2 is an efficient glider, so if I get down close to the ground, the U-2 will just keep gliding,” Duckett says. “I literally have to run out of energy to get the airplane back on the ground. The U-2 is a very heavy aircraft. I’m sweating and working because it’s all cables and pulleys—very tough to control.”

When Duckett gets down to about 10 feet, his mobile officer starts guiding him down. “I wear this big helmet and there’s not much visibility in the cockpit—I can’t see much. He will talk me down to two feet and then it’s my job to hold it there.”

After landing, Duckett slows down the plane it tips over to one side. “The wing drags on the ground—they’re designed to do that.”

For such a technological marvel, the U-2’s mission flights usually end quite unscientifically with the help of crew members who perform the last step in the landing process. “Finally, they just jump on the wing, pull it down, and put those pogo wheels back on.” After this last step, Duckett can get some well-deserved rest before his next mission.

Want to learn more about the world's most exciting planes? Check out our collection!